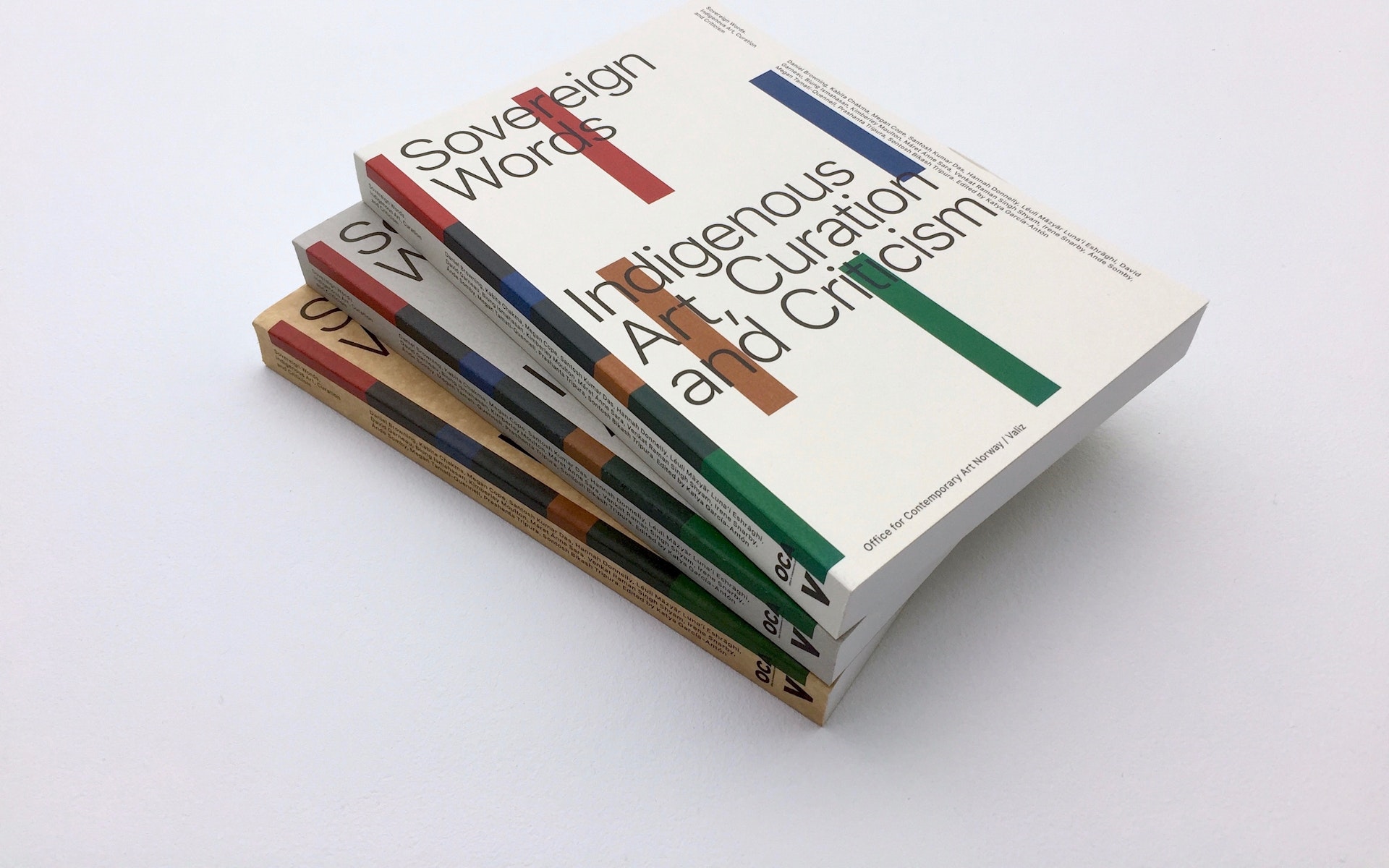 ‘Sovereign Words. Indigenous Art, Curation and Criticism’ was launched in Tromsø in 2018. A first-of-its-kind reader of Indigenous voices, Sovereign Words charts perspectives across art and film, ethics and history, theory and the museology field. With the canonical power systems of the international art world increasingly under fire today, the book makes a strong bid for knowledge-building and intellectual alliances that might inform the cultural and artistic processes of Indigenous and non-Indigenous futures.

Kabita Chakma is a freelance researcher, architect, writer and occasional guest lecturer and teacher at the School of Design, part of the University of Technology, Sydney (UTS). She is a Coordinator of the Chittagong Hill Tracts Indigenous Jumma Association Australia (CHTIJAA), and a Community Adviser to BODHI (Benevolent Organisation for Development, Health and Insight), Australia, a charity organization. Her interests include the history, culture, art and architecture of disadvantaged communities, particularly Indigenous peoples of the CHT, Bangladesh, as well as environmental sustainability.

David Garneau is a Professor of Visual Arts at the University of Regina. His practice includes painting, curation and critical writing. With Kathleen Ash Milby, he recently co-curated ‘Transformer: Native Art in Light and Sound’ at the National Museum of the American Indian, New York; ‘Moving Forward, Never Forgetting’, with Michelle LaVallee, an exhibition concerning the legacies of Indian Residential Schools, other forms of aggressive assimilation and (re)conciliation, at the Mackenzie Art Gallery in Regina; and ‘With Secrecy and Despatch’ with Tess Allas, an international exhibition about the massacres of Indigenous people and memorialisation, for the Campbelltown Art Centre, Sydney. Garneau has recently given keynote talks in Australia, Aotearoa / New Zealand, the United States and throughout Turtle Island (Canada). He is a co-researcher with ‘Creative Conciliations’, a five-year SSHRC-funded curatorial project (Social Sciences and Humanities Research Council of Canada), and he is working on a public art project for the City of Edmonton, Alberta. His paintings can be found in numerous public and private collections.

Kimberley Moulton is a curator and a writer who has engaged with many museums and contemporary art spaces. She is Senior Curator of South-Eastern Aboriginal Collections for Museums Victoria at Melbourne Museum, focusing on the intersection of contemporary First Peoples’ art and cultural material in museums. Prior to this, Moulton was Project Officer and Curator at Bunjilaka Aboriginal Cultural Centre, Melbourne Museum between 2009 and 2015, and an Assistant Curator for the ‘First Peoples’ exhibition at the Melbourne Museum in 2013. Alongside her institutional curatorial roles, she has independently curated: ‘where the water moves, where it rests: the art of Djambawa Marawili’, Kluge-Ruhe Aboriginal Art Collection, Charlottesville (2015); ‘State of The Nation’, Counihan Gallery, Brunswick (2016); and ‘A Call From The West: The Continuing Legacy of Mr William Cooper’, Footscray Community Arts Centre (2016). She was also a co-curator for the Artbank Sydney Social Day 2016, ‘RECENTRE: sisters’, City of Melbourne Gallery (2017); and co-curator of ‘Next Matriarch’, ACE Open Adelaide and the TARNANTHI Festival (2017). In 2018, Moulton curated ‘Mother Tongue’ for the guest curatorial series ‘Octopus’ at Gertrude Contemporary, Melbourne. Moulton is an alumna of the National Gallery of Australia’s Wesfarmers Indigenous Arts Leadership Program 2010, the British Council’s ACCELERATE programme (2013), a National Gallery of Australia International Curatorial Fellow at Kluge-Ruhe Aboriginal Collection (2015), and a Victorian Curatorial Representative for the First Nations Exchange Program, United States of America 2016, at the Venice Biennale (2017), and First Nations Exchange Canada (2017). She was a co-curator of ‘Mandela: My Life’ at Melbourne Museum (2018), the story of Nelson Mandela.

Biung Ismahasan is a curator and researcher, currently working on his PhD in Curating at the University of Essex’s Centre for Curatorial Studies. His research involves issues of contemporary Indigenous curatorial practice and aesthetics, focusing on the curation of Taiwanese Indigenous contemporary art. His current research emphasises the issues of participation, performativity and the historiography of Indigenous curation and exhibition design. He received an MA in Cultural Policy, Relations & Diplomacy from Goldsmiths, University of London, in November 2014. Belonging to the Bunun Nation of Taiwanese Indigenous groups, he was awarded the PULIMA Art Award (the first national art award dedicated to Indigenous contemporary art), and exhibited at the Kaohsiung Museum of Fine Arts in Southern Taiwan in 2014. His most notable curatorial projects include ‘Anti-Alcoholism: an Indigenous performative encounter 2014–19’, an international performance art exchange of Indigenous artists from Taiwan. He recently curated ‘Dispossessions: Performative Encounter(s) of Taiwanese Indigenous Contemporary Art’ at Goldsmiths in May 2018.

Irene Snarby is a Doctoral Research Fellow in Art History at SARP: The Sámi Art Research Project at UiT, The Arctic University of Norway, where she is carrying out research into the works of the artist Iver Jåks. Snarby has worked as a curator within the Art Department of The Sámi Museum – RiddoDuottarMuseat in Kárášjohka (Sápmi/Norway) and has been a member of the Sámi Parliament’s Acquisitions Committee for Contemporary Art. She has written essays, given lectures and been an editor for several publications of Sámi art for over twenty years. She has also been an advisor on major art projects such as the International Indigenous Art exhibition ‘Sakahàn: International Indigenous Art’ at the National Gallery of Canada, in Ottawa, and ‘There is no’, at the Northern Norwegian Art Museum.

Ánde Somby is a writer, yoiker (yoik is the Sámi way of singing or chanting, which differs from Euro-American vocal music) and Associate Professor of Law at UiT (Arctic University of Norway) where he specialises in Indigenous rights law. He is the former Chair of the Centre for Sámi Studies at UiT and former leader of Sámiid Nuoraid Searvi (Sámi Youth Association in Kárášjohka, 1976–78). 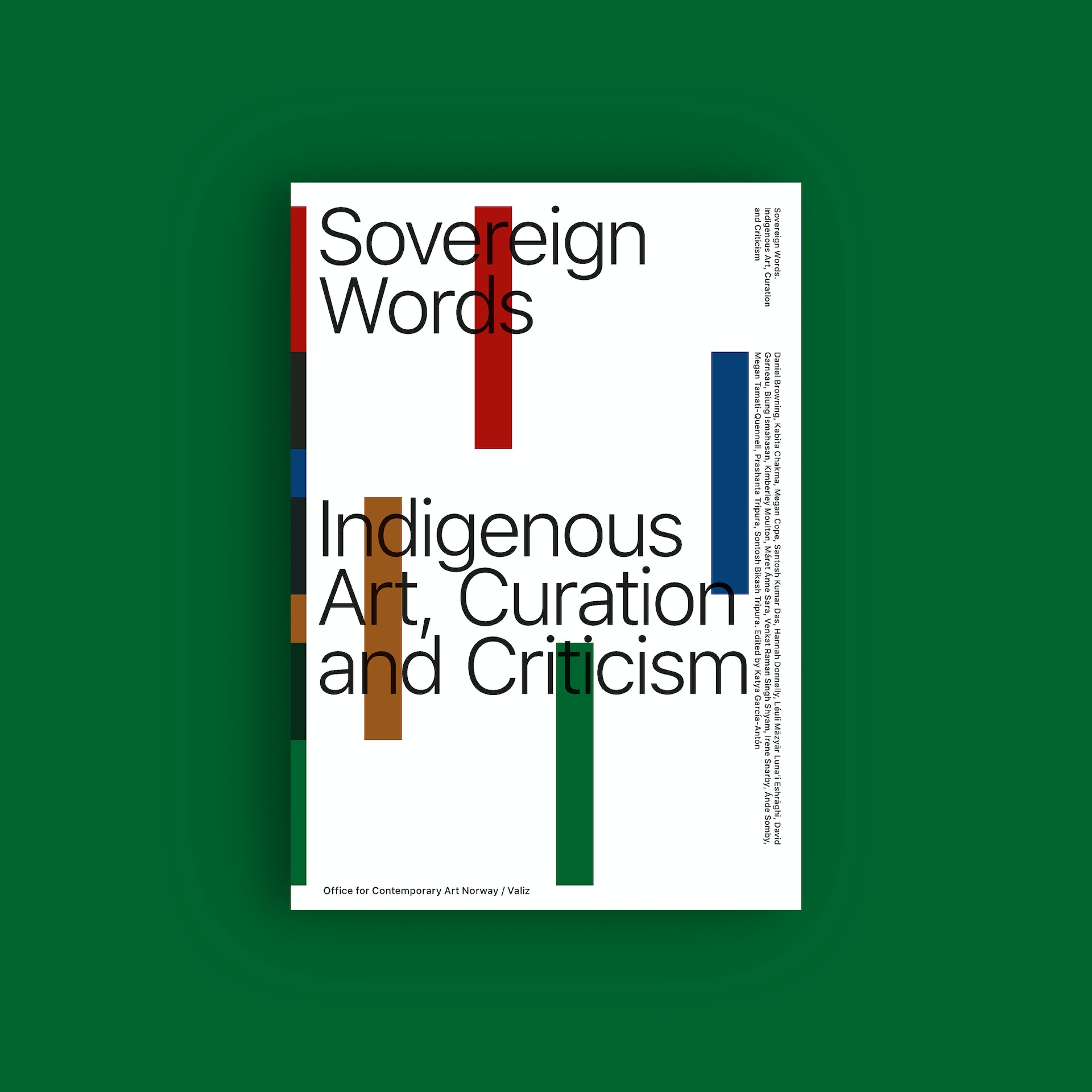 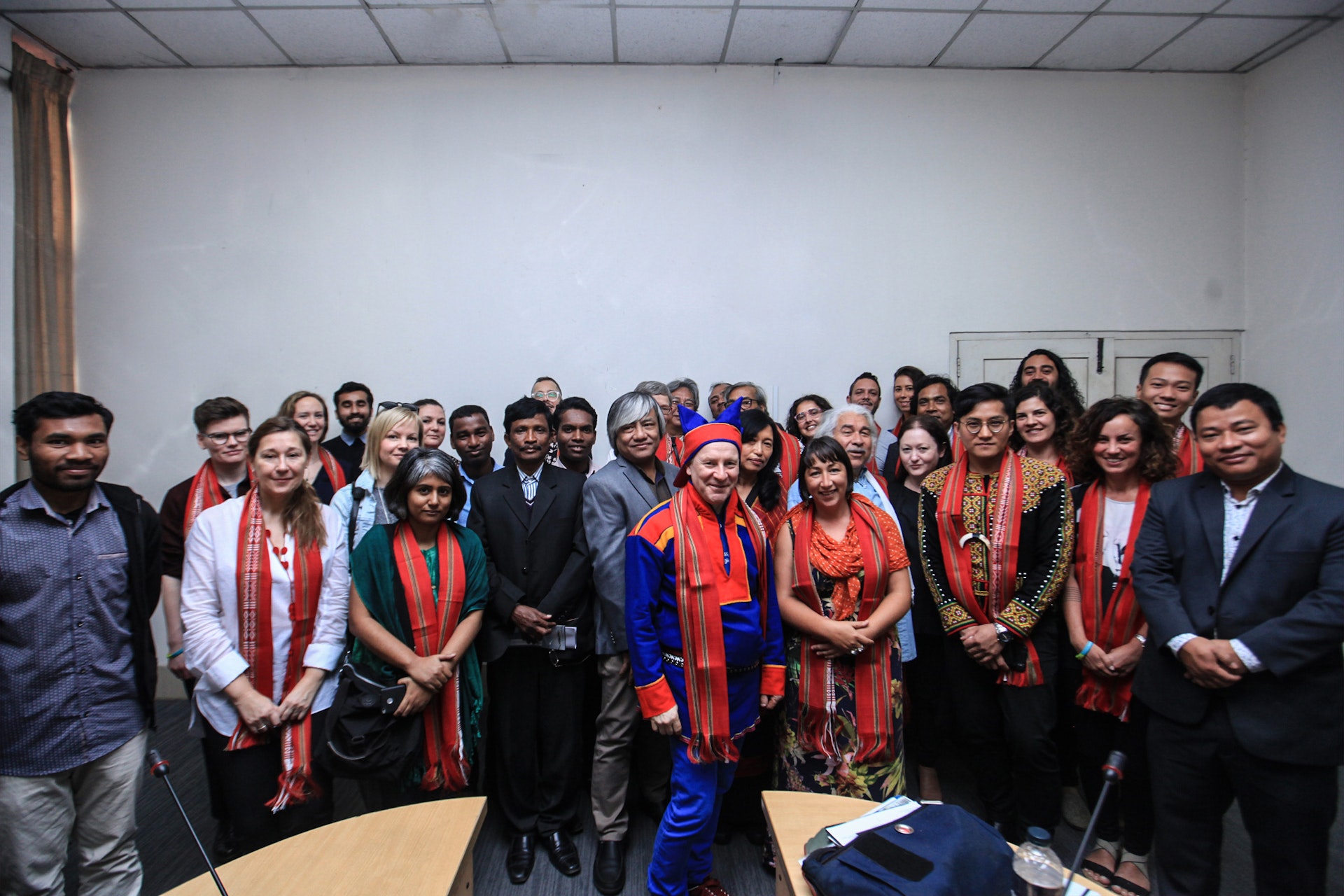 Sovereign Words. Facing the Tempest of a Globalised Art History 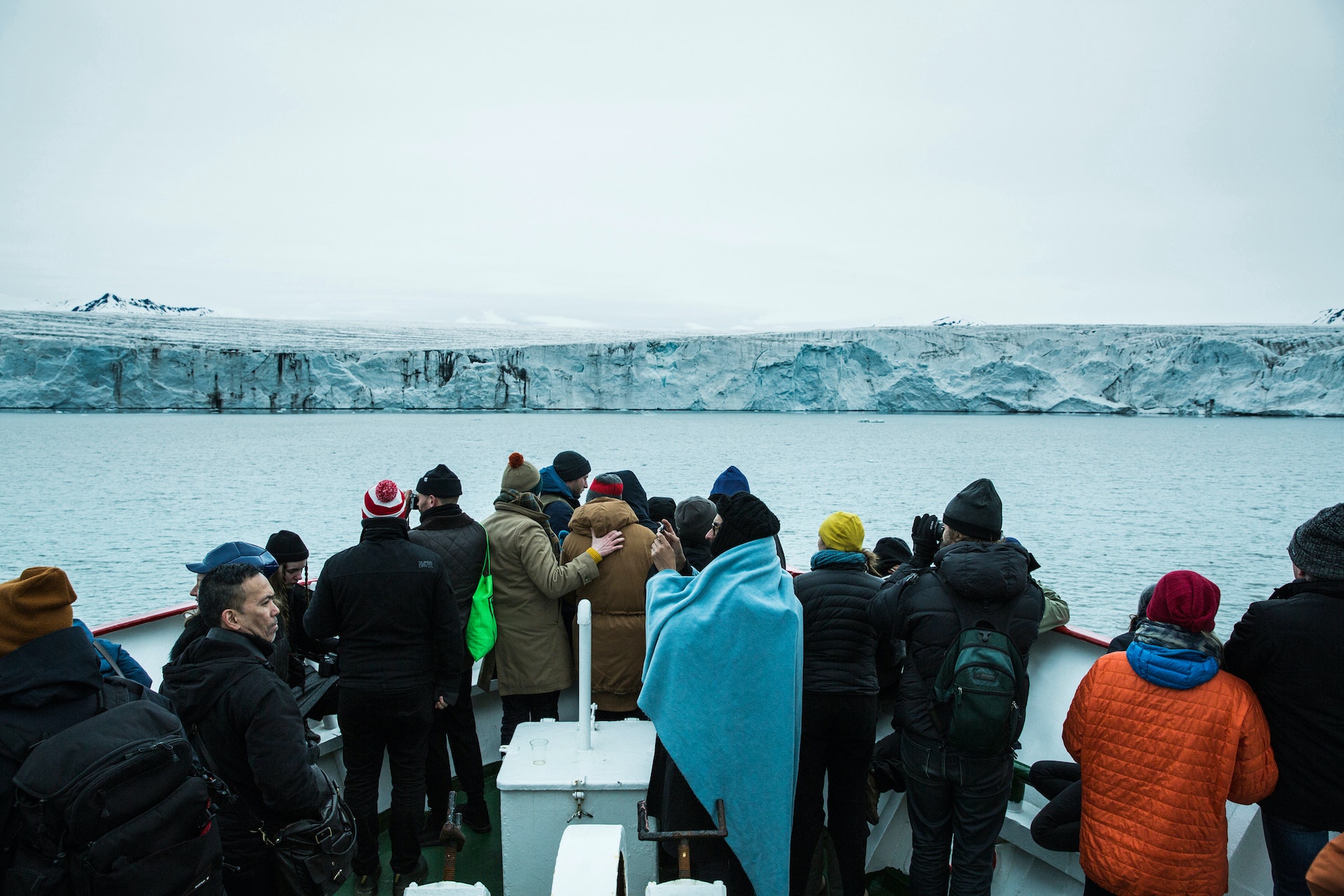