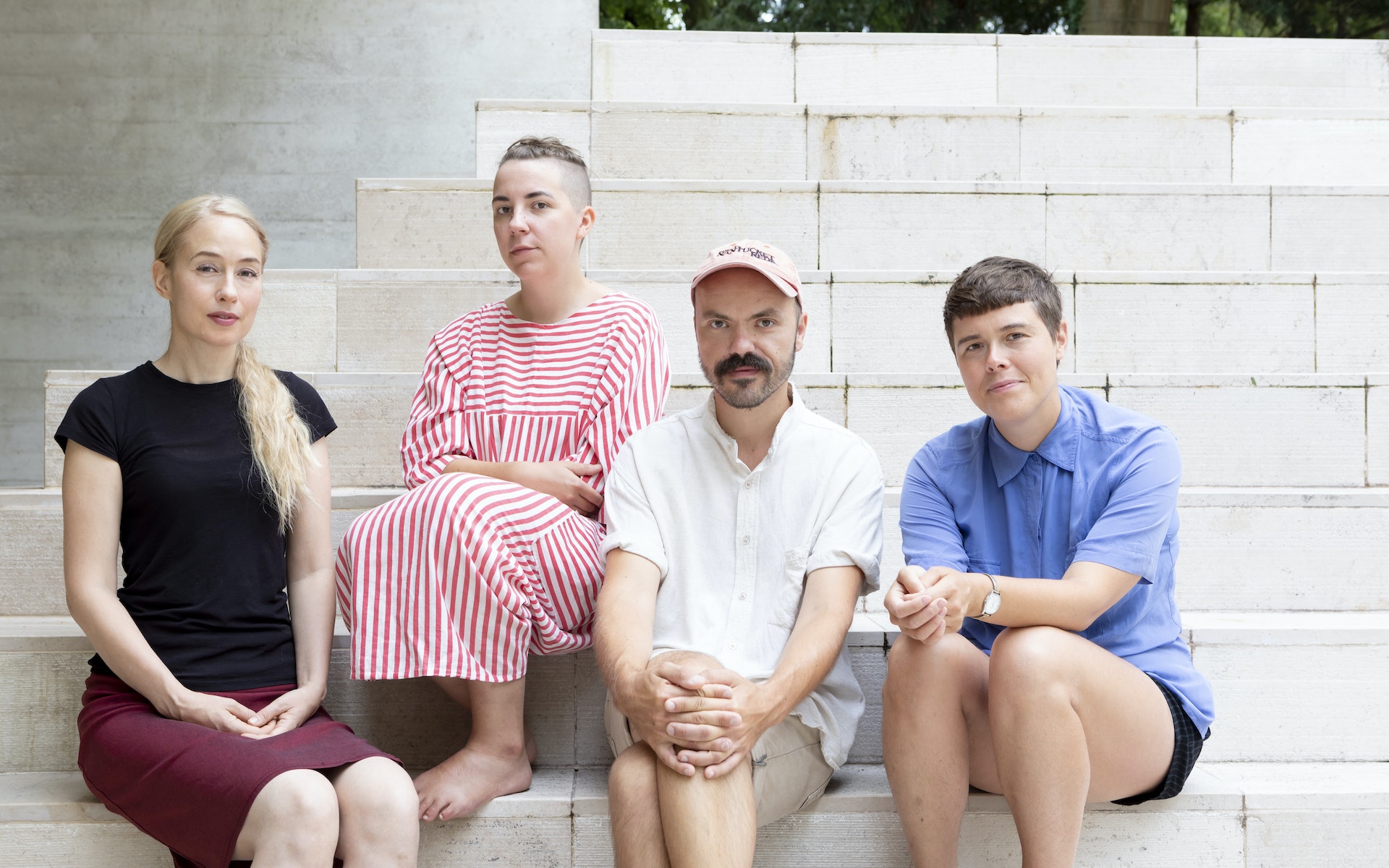 The theme was centered around the complex and varied relations between the human and nonhuman in an age when climate change and mass extinction are threatening the future of life on Earth. When imagining the future, humans face the responsibility of acknowledging multispecies entanglements and the need to renegotiate existing interspecies relations.

It is often difficult for humans to notice life forms that exist on a scale different from theirs, such as microscopic organisms, the slow workings of toxic agents, or durational processes of decaying organic matter. By heightening the visitors’ awareness of the materiality of the space and the artworks, and by assimilating their bodies to other life forms, the exhibition attempts to establish a connection with more-than-human agencies.

The biennial gardens are bordered by the Venetian Lagoon, a tourist-infested city, and hubs of mainland industry, all spurring contemplation of the eco-crisis, the erosion caused by centuries of mass tourism, and the survival prospects of marine species native to the lagoon, which compete for space with massive cruise ships.

The pavilion itself is susceptible to exterior conditions. Occasional high tides and changes in the weather expose the exhibition to unpredictable forces.

The invited artists were Finnish duo nabbteeri, Norwegian Ane Graff and Swedish Ingela Ihrman. The artists’ practices often involve a fusion of visual art with humanities and natural sciences, a collaborative or dialogical process that takes place within a multi-disciplinary community. All the artists created new works for the show in the Nordic Pavilion.

Artist collective nabbteeri typically begin by mapping the place where they are temporarily set up. They gather the materials on site and incorporate recycled objects that evolve into mesh-like installations. Their works are compositions based on interactions between the artists and other things, including nonhuman organisms. They often focus on the tiniest life forms, minute species co-existing with us. nabbteeri slows down the working process in order to discover a locally-oriented practice or a manual skill that often requires concentration sometimes accompanied by digitally processed images. This involves forming an intense relationship with existing knowledges. Working with in-situ matter also connects their work with the ecological artwork production.

In the constellation of elements for the Nordic Pavilion in 2019, nabbteeri delved into the materiality of the Pavilion and the Giardini. They also focused on the organic surplus, garden waste, produced by the Giardini. Compost marks an endeavour to create a self-maintaining, life-producing ecosystem within the pavilion premises. Nonhuman life is maintained inside the building by plant cuttings, tentacular beings that remind us of the rhizomatic nature of co-existence. The materiality of the travertine and concrete-built pavilion was reiterated in the sand-filled, elements, which contain material that was released in the Giardini after the biennale was closed. In the backyard, Dead hedge prevented human visitors from approaching the site from behind the pavilion, while offering a space for birds and invertebrates.

Ane Graff creates works that combine her material research with a broad range of research disciplines, e.g. microbiology and chemistry. She is influenced by feminist new materialisms’ re-thinking of material reality, which takes a relational approach to matter. Through her installations, she confronts the allegedly stable, science- and culture-based classifications, while asking how notions of human exceptionalism and dualistic thinking are connected to the ecological crisis.

The states of inflammation in Graff’s works refer to the connections between climate change, Western societies driven by economic growth, the extinction of immune-modulating intestinal microbes and the spread of inflammatory diseases. Her installation makes observable how the human body is entangled with other agencies, such as bacteria, as well as the toxicity of the environment. The displayed objects and their containers, the glass cabinets, refer to the human body and its current inflammatory state, emitting signals from the past and hinting at possible future scenarios. The cabinets’ glass surfaces indicate fluidity, as if they are melting before our eyes. In her sculptures, Graff incorporates various material experiments. The materials keep interacting and forming new mixtures during the exhibition, denying the human control over them.

Ingela Ihrman weaves together imagination, craft techniques, as well as sensibilities and personal experiences in her objects, moving images and texts. Occasionally, her installations include an element in which she performs dressed in a self-made plant or animal costume. Drawing on the feminist performance tradition, she uses her own body to critically analyse culture-nature divisions and to open up the prevailing male and scientific gaze to queer horizons. Relating one’s own body to diverse material worlds or emulating their cycle of life can foster an enhanced understanding of life’s various entanglements. Her algae installation tells a story of the liquid origins of human bodies and the existing connections between diverse lifeforms. Silent, large-scale objects invite the exhibition visitors to partake in a bodily experience. By allying with worlds commonly considered others, it is possible to transgress limiting concepts and to reconsider notions of belonging and co-existence. Visitors are invited to read Seaweedsbladet #1, a newspaper that was distributed to all households in the residential area of Seved in Malmö, where Ihrman is based. The newspaper reflects on how the human body is linked to a variety of agencies.

The Nordic Pavilion, designed by Norwegian architect Sverre Fehn, was completed in 1962 and has since been a space for collaboration between three nations: Finland, Norway and Sweden. For the period 2017-2021, the art in the Nordic Pavilion is presented as a joint project by the Nordic Committee. The commissioner of the 2019 Nordic Pavilion was the Museum of Contemporary Art Kiasma / Finnish National Gallery. The exhibition was curated by Kiasma’s director Leevi Haapala and curator Piia Oksanen. The co-commissioners of the other Nordic countries were Moderna Museet’s co-director Ann-Sofi Noring and Office for Contemporary Art Norway’s (OCA) director Katya García-Antón.