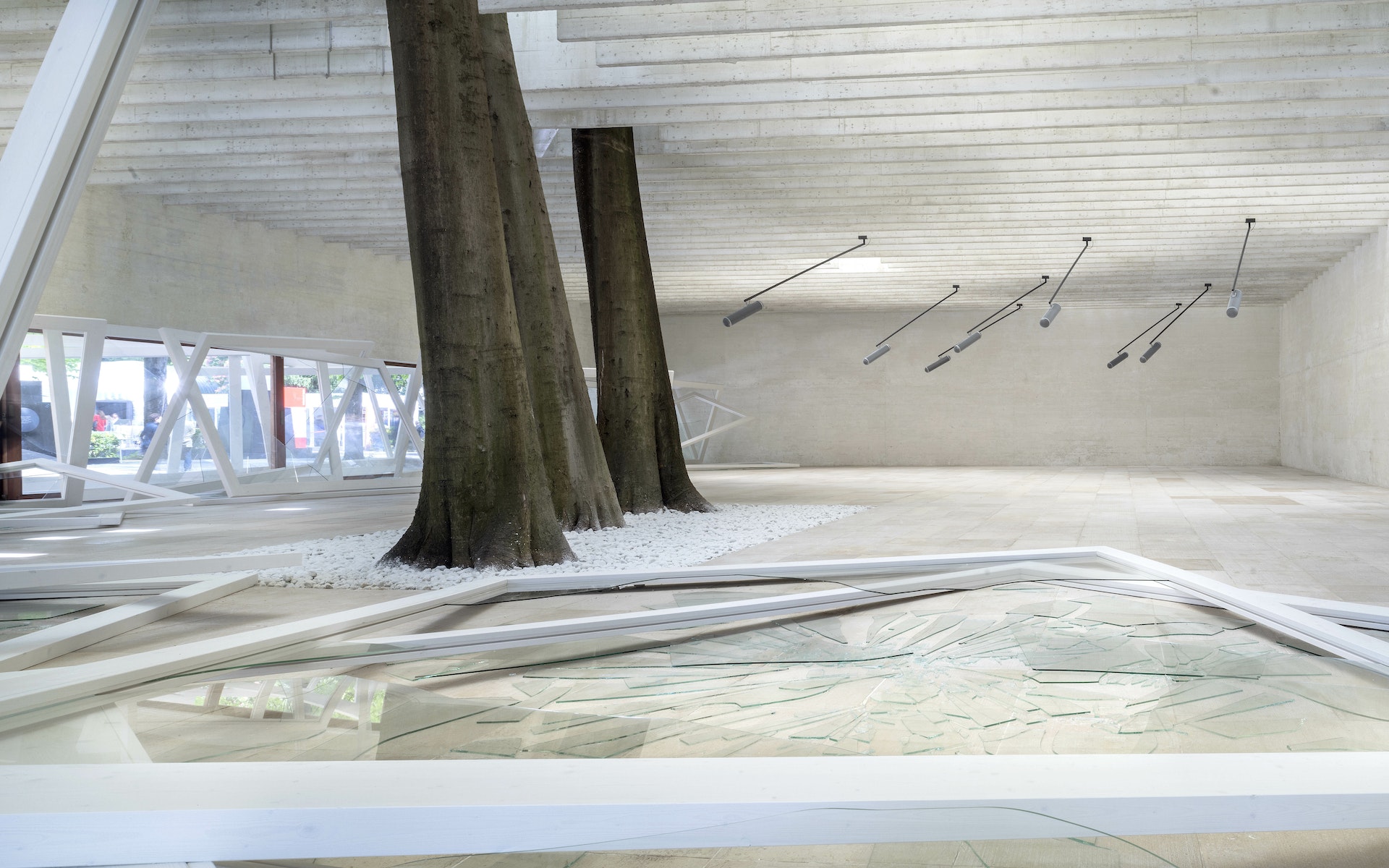 In 2015 OCA presented ‘Rapture’ as Norway’s contribution to the 56th International Art Exhibition of La Biennale di Venezia. Norway was solely responsible for the Nordic Pavilion at the Venice Biennale in 2015, for the first time in its history. For this unprecedented occasion, OCA commissioned artist Camille Norment (b. 1970) to develop the project.

Norment’s ‘Rapture’ is a site-specific, sculptural and sonic installation in the Nordic Pavilion, for which the American-born, Oslo-based artist has composed new music on the glass armonica – a legendary 18th-century instrument that creates ethereal music from glass and water. Invented by Benjamin Franklin and once played by Mozart and Marie Antoinette, the glass armonica was at first celebrated for curing people with its entrancing music, but later it was banned because it was thought to induce states of ecstasy and arouse sexual excitement in women. If it had the power to cure, so the logic went, this bewitching instrument might also have the power to kill through over-exciting its listeners.

In a contemporary context, Norment explores the tensions this music raises today by creating a multi-sensory space, which reflects upon the history of sound, contemporary concepts of consonance and dissonance, and the water, glass and light of Venice. The artist composes a chorus of voices that correspond to the unresolved notes of the much censored “devils’s” tritone and of the glass armonica, and this chorus immerses visitors to ‘Rapture’.

‘Rapture’ explores the relationship between the human body and sound, through visual, sonic, sculptural and architectural stimuli. Today the sonic realm can be both a space of misuse, as we have seen in the militaristic use of sound to abuse the body, and of affirmation, as in the performative utterance of free speech to affirm the right of the body’s very existence. The body can be stimulated and moved by sound, and in Norment’s work, the Nordic Pavilion itself becomes a body in rapture and rupture, consonance and dissonance.

Camille Norment comments: ‘Sound, by its nature, permeates borders – even invisible ones. Throughout history, fear has been associated with the paradoxical effects music has on the body and mind, and its power as a reward-giving de-centraliser of control. Recognised as capable of inducing states akin to sex and drugs, music is still seen by many in the world as an experience that should be controlled – especially in relation to the female body – and yet it is also increasingly used as a tool for control, especially under the justifications of war.’

Katya Garcia-Anton, Director of OCA, Norway and Curator of the Nordic Pavilion comments: ‘We have commissioned Camille Norment to represent Norway at the Nordic Pavilion of the Venice Biennale 2015 because she is one of the most innovative, cross-disciplinary artists working in Norway today. Her work is both poetic and physical, and considers sound as an evocative artistic medium. Norment is an American-born artist, who has chosen for over a decade to live and work in Oslo, which reflects the stimulating environment for experimental contemporary art and culture in the Norwegian capital and around the country. We wish to celebrate this on the occasion of Norway's first ever Nordic Pavilion.’

Throughout the run of la Biennale di Venezia, Norment is performing new compositions on the glass armonica and invited artists and musicians to participate in a series of performances that echo elements in the installation.

The Camille Norment Trio consists of the glass armonica, played by Norment; the Hardanger fiddle, played by Vegar Vårdal; and the electric guitar, played by Håvard Skaset. Each of these instruments was thought, at various points in history, to invoke a socially and sexually transgressive experience in the body, especially the female body, and subsequently banned. In these performances Norment performs new compositions with her trio whose instrumentation parallels the artist’s investigations into the relationship between vibration and the body as perceived during the Enlightenment period, and today through social and scientific discussions.

The Swedish vocalist Sofia Jernberg will also perform with Camille Norment. While Norment plays the glass armonica, whose sonic vibrations permeate the space and the broken glass (which has sonic exciters attached to it that send vibrations through it), Jernberg’s versatile vocalisation will expand the 12-voice chorus that Norment composed for the soundscape of the pavilion. Both will push the limits of sound and music.

Camille Norment and David Toop present an abstracted ‘performance lecture’, encompassing text, the voice and sound, in relation to vibration, the body and hysteria. Hysteria, long deemed a female disease, extended to ‘an epidemic of male hysteria’ with the effects of shell shock during WWI and continues to be pertinent in post-war syndromes today as well as in other instances of socially and culturally induced forms of collective-hysteria. The performance also draws from American poet Sara Teasdale’s poem ‘There Will Come Soft Rains’, written after WW1 and reflecting upon the resilience of nature to outlive the catastrophic exploits of humanity.

The performances are co-produced by OCA, nyMusikk and Ultima Oslo Contemporary Music Festival.

Rapture includes a three-part publication that reflects upon the relationship between sound and the visual arts, across time, as well as it complicates the hegemony of vision in contemporary theory and art practice. In the first launching for the opening of the Biennale, authors David Toop, María del Pilar Blanco and Rob Stone contribute essays reflecting on how sounds shapes our environment, our bodies and our minds. This first publication also includes a discussion between curators Katya García-Antón and Antonio Cataldo with artist Camille Norment, unfolding her artistic perspective on how sound has the power to act as a mediator of cultural experience. Click here to purchase the publications.

ABOUT THE ARTIST AND THE PERFORMERS

Camille Norment Trio, constituted by Vegar Vårdal, Håvard Skaset, and Camille Norment, investigates the visceral qualities of resonance, noise, and overtone. Their performances are an organic movement between the composed and the improvised, creating a dynamic soundscape that defies a fixed genre reference. The Camille Norment Trio’s performance credits include The Kitchen, New York, NY; Cleveland Museum of Art; Ultima New Music Festival, Oslo; The Museum of Contemporary Art, Oslo; and the Henie Onstad Kunstsenter (HOK). Their first release, Toll, is available on Prisma Records. Reviews of their work have appeared in The Wire, The New York Times, The Wall Street Journal, Aftenposten and KuNordische Musik.

Sofia Jernberg is soprano, voice-artist, improviser and composer. She studied jazz at Fridhems Folkhögskola, Svalöv, Sweden and trained at Gotlands Tonsättarskola, Visby, Sweden, a school exclusively devoted to music composition. Jernberg was the 2008 Royal Swedish Academy of Music Jazz Award recipient and she co-leads and composes for modern jazz octet Paavo and contemporary Lieder quartet The New Songs. Throughout the years she developed a unique vocabulary of sounds and techniques which include split tone singing, pitchless singing and distorted singing which allow her to appear in a broad constellation of music performances across time and genres.

David Toop is a composer, author, curator and Professor of Audio Culture and Improvisation at the London College of Communication. He has published extensively. His first book, Rap Attack, is now in its third edition. Since the publication Ocean of Sound in 1995 he had recorded five solo albums, including Screen Ceremonies, Pink Noir and Spirit World and published Exotica: Fabricated Soundscapes ina Real World.

The project has been commissioned by OCA. It has been made possible through the generous sponsorship of ABG Sundal Collier, Reitan and Selvaag, and with additional support of the Norwegian Ministries of Culture (KUD) and of Foreign Affairs (UD). Further support has been provided by Fritt Ord – the Freedom of Expression Foundation, Oslo. Camille Norment’s project is being produced through a generous grant by Norsk Kulturråd/Arts Council Norway, and through the support and collaboration of nyMusikk, Ultima – Oslo Contemporary Music Festival, NOTAM – Norwegian Center for Technology in Music and the Arts, and Music Norway.

Click here to read about 'Within the Toll', Camille Norments permanent outdoor installation within the sculpture park at the Henie Onstad Kunstsenter (HOK).