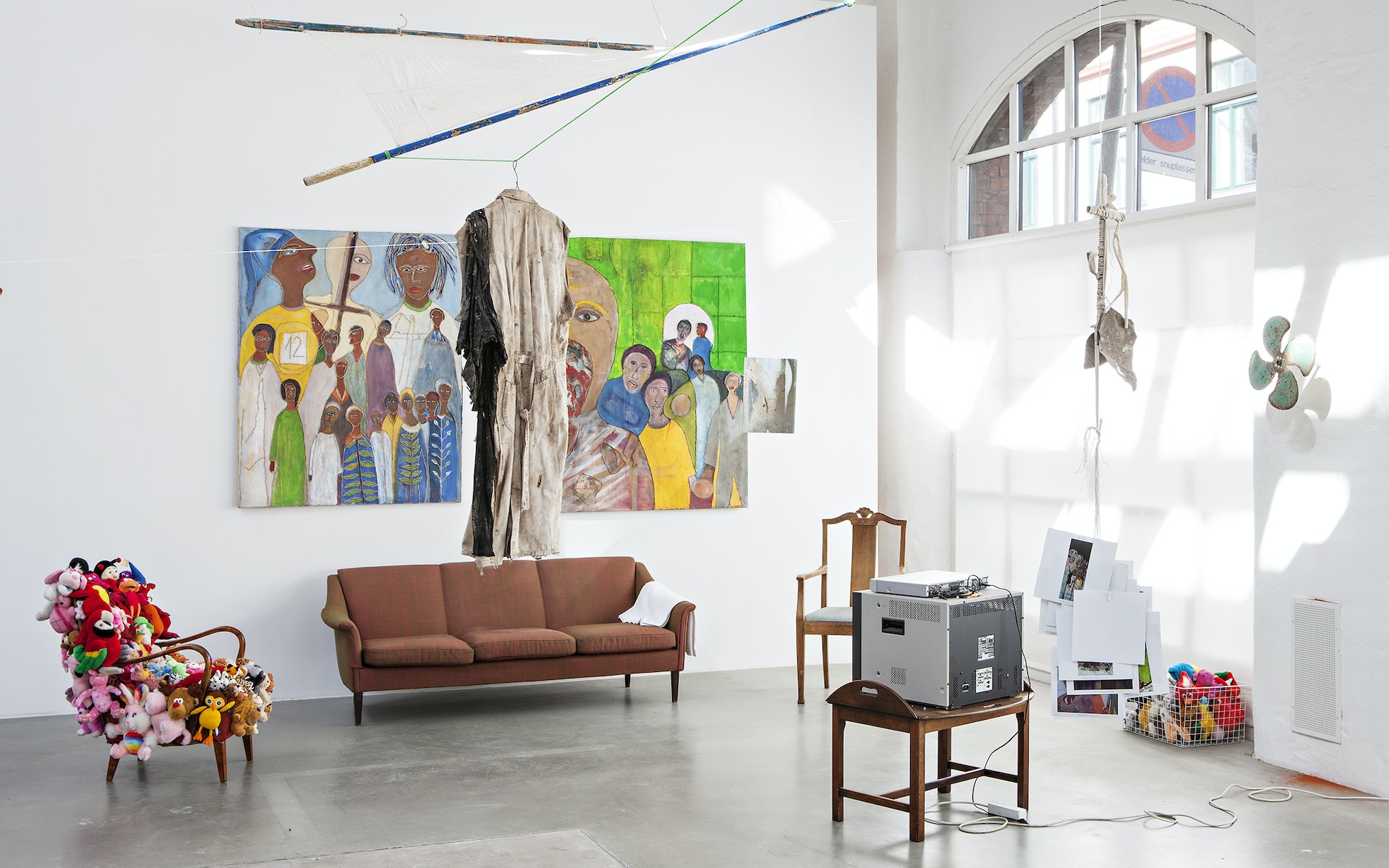 The Office for Contemporary Art Norway is presenting ‘WORD! WORD? WORD! Issa Samb and the Undecipherable Form’, the first solo exhibition in Europe by the seminal Senegalese artist Issa Samb. The exhibition brings together a selection of emblematic works made by Samb over the past 25 years, including paintings, drawings, sculptures, assemblages and installations, as well as objects, artworks made by others and diverse materials he has amassed in his studio in Dakar’s rue Jules Ferry. They will be accompanied by performative actions presented during the opening days – all these elements coming together to reflect Samb's vast galaxy of interconnected universes, in which everyday signs are transformed into altars to personal obsessions.

In 1974, along with filmmaker Djibril Diop Mambety and a group of artists, writers, musicians, actors and filmmakers, Samb founded the Laboratoire Agit’Art. Its multi-disciplinary actions were directed against the formalism of the École de Dakar, an object-bound movement developed at the National Art School of Dakar and shaped by Léopold Sédar Senghor’s philosophy of négritude. Aiming to depart from this conception into experimentation and agitation, ephemerality rather than permanence, and political and social ideas rather than aesthetic notions, the Laboratoire Agit’Art developed a distinct ‘aesthetic of the social’. Audience participation was paramount to the group’s work, as was the privileging of communicative acts over the physical object. Neither utopian nor self-referential, it grounded its actions in the immediate sociopolitical situation. Today many of the early members have passed away, but the group’s spirit persists, materialised in all of Samb’s work.

From the time of the creation of the Laboratoire Agit’Art, Issa Samb has produced a graspable, yet cryptic and evanescent body of work. It is a body of work that, despite its avant-garde nature, is firmly rooted in African traditions of artistic multiplicity and simultaneity of forms and actions, where the spoken word and performative actions are highly regarded. And in keeping with Samb’s readings of Marxist philosophy and aesthetics, many of his sculptural assemblages take the paradigm of revolutionary movements as their subject matter, suggesting the possibility that the energy of the visual arts can be harnessed in support of the struggles of the weak and disadvantaged.

‘WORD! WORD? WORD!’, curated by Koyo Kouoh, brings to Europe a selection of works focusing on Samb’s multifaceted individual production, in a performative installation that references Samb’s home studio in Dakar, referred to as 'La Cour' or 'The Yard'. The display will create a fluid system of exchange between the objects, the artist and the audience.

The exhibition is organised in collaboration with Raw Material Company in Dakar, where it will travel in late 2013. A monographic publication on the work of Issa Samb will be published in conjunction with the opening in Dakar. This exhibition project follows Samb's participation in OCA's International Studio Programme in 2012, and a series of lectures that since October 2012 OCA has dedicated to the négritude movement and its influence on art, culture and politics in Africa, with speakers Salah Hassan, Manthia Diawara and Souleymane Bachir Diagne.


This exhibition and wider programme is made possible by 03 funds from the Norwegian Ministry of Foreign Affairs.

Issa Samb was born in 1945 in Senegal and lives in Dakar. In 1974 he founded, together with a group of artists, writers, film-makers, performance artists and musicians, the Laboratoire Agit’Art, whose aim was to transform the nature of artistic practice from a formalist, object-bound sensibility to practices based on experimentation and agitation, process rather than product, ephemerality rather than permanence. With a focus on the contingent character of actions, the Laboratoire was informed by a critique of institutional power. Samb also co-founded the Gallery TENQ – Village des Arts in Dakar. He is the author of numerous plays, poems and essays. A retrospective of his work was held at the National Art Gallery, Dakar in 2010. His work has been included in exhibitions such as dOCUMENTA (13), Kassel, Germany (2012), the Biennale de l’Art Africain Contemporain, Dak’Art, Dakar (2008) and ‘Seven Stories of Modern Art in Africa’, Whitechapel Gallery, London, UK (1995).

Koyo Kouoh is a Cameroonian-born independent exhibition maker and cultural producer educated in Banking Administration and Cultural Management in Switzerland and France. She is the founder and artistic director of Raw Material Company, a centre for art, knowledge and society in Dakar, Senegal. Kouoh has served as agent to Carolyn Christov-Barkagiev’s dOCUMENTA (13). She co-curated ‘Les Rencontres de la Photographie Africaine’ in Bamako in 2001 and 2003. Specialising in photography, video and art in the public space, she has curated numerous exhibitions internationally and written on contemporary African art. Besides a sustained theoretical and exhibition program at Raw Material Company, she maintains a dynamic curatorial activity beyond the African borders. Over the past years she has overseen exhibitions, publications and discursive programmes including contemporary artists, thinkers and writers. Recent exhibitions include ‘Hollandaise: a journey into an iconic fabric’, Stedelijk Museum Bureau Amsterdam, the Netherlands and Raw Material Company (2013); ‘Boulevard du Centenaire Made in China, photography of the Chinese migration to Dakar’, Shanghai Biennial and Raw Material Company (2012) and ‘Chronicle of a Revolt: photographs of a season of protest’, Raw Material Company and Haus der Kulturen der Welt, Berlin (2012). In collaboration with Anne-Marie Bouttiaux and David Adjaye, she curated the contemporary section of ‘GEO-graphics: a map of African art past and present’, an exhibition that celebrated 50 years of African Independence at Palais des Beaux Arts in Brussels, Belgium (2010). She co-curated ‘Make yourself at home’, an exhibition in collaboration with Charlotte Bagger-Brandt for Kunsthal Charlottenborg in Copenhagen, Denmark (2010). The project reflected on the notion of hospitality in contemporary art in the context of international migration. Kouoh was associate curator of SUD, Salon Urbain de Douala (2010), a triennial of art in the public space initiated by the contemporary art centre Doual’art in Douala, Cameroon.

Raw Material Company is a centre for art, knowledge and society established in Dakar in 2008 as a mobile site for art practice and critical exchange. In April 2011, as a result of a practice-oriented assessment of the need of a recognisable and localisable space, Raw Material Company opened a 400m2 space in Dakar. The centre works to promote appreciation and growth of artistic and intellectual creativity in Africa. The underlying rationale of its program is a firm belief in visual arts as a potent tool capable of shifting perspectives, and to ignite engagement for art practice as a viable path for social and political transformation. The programme is transdisciplinary and is equally informed by urbanity, literature, film, architecture, politics, fashion, cuisine, and diasporas.