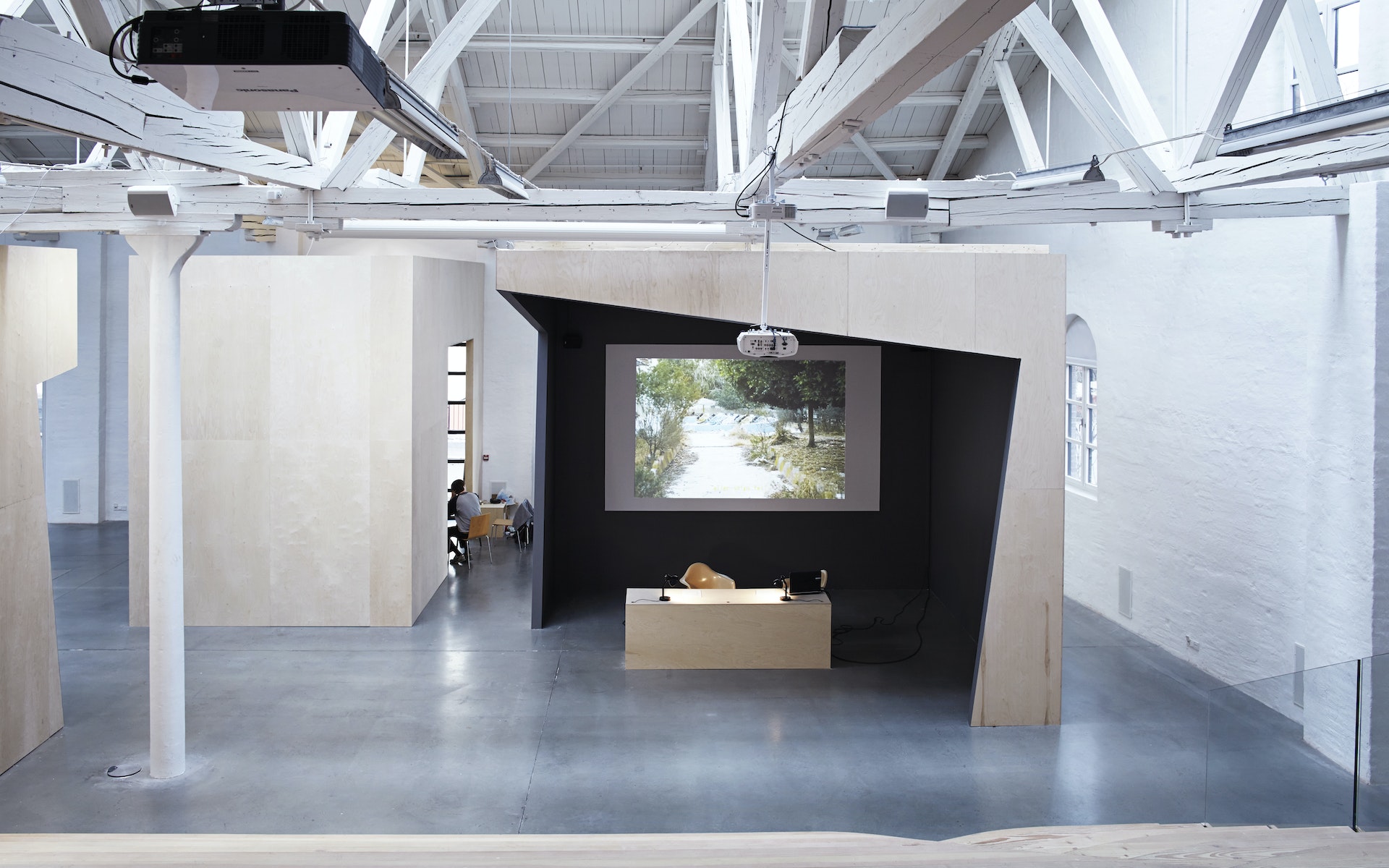 ‘On Love, Departures and Countering Defeats in Choleric Times. Three Stagings’, was a project that evolved through three individual, yet interconnected presentations involving lecture performances, talks, unfinished moments and exhibition fragments, all of which contribute to speculations around the choleric moment we are experiencing globally.

‘Of Love, Departures and Countering Defeats in Choleric Times. Three Stagings’ consists of concrete, yet interconnected, presentations developed between autumn 2014 and autumn 2015, by artists Lara Khaldi / Yazan Khalili in Staging One; Ayreen Anastas / Rene Gabri with Ben Morea in Staging Two; Basel Abbas / Ruanne Abou-Rahme in Staging Three, which reflect upon the choleric moment we are experiencing globally.

Contemporary historians are currently debating the degenerative roots and the consequences of the uncertain conditions within which we currently exist, affecting socio-political, religious, environmental and financial terrains. With this global context in mind the project’s three reflexive stagings consider how the unraveling of modernity relies on the ongoing sense of fracture and instability in our times. In ‘Of Love, Departures and Countering Defeats in Choleric Times. Three Stagings’ the artists together with guest philosophers, historians and anthropologists, invite us to imagine alternatives that might counter the sense of frozen inaction and despondency these vertiginous forces provoke in our society.

Within this context, the project speculates on the possibility to transform the degeneration of an open-ended state of worldly affairs into a moment of intellectual and social strength, through experimental, flux-based and un-concluded artistic projects that explore the intimacy of love, the fiction of history and the illusion of modernity, amongst other ideas, as empowering tools for contemporary reflection.

‘Of Love, Departures and Countering Defeats in Choleric Times. Three Stagings’ also explores the parameters of duration within the exhibition format and the force of incompletion within the constitution of the art work. Audiences are hence invited to return for three stagings during the space of twelve months, and engage with a variety of elements including a lecture performance whose individual components have an afterlife once the performance is over, talks that interlink the stagings, a film produced live in situ and spatially deconstructed, various unfinished moments within the art work and the use of the fragment – sonic and visual – as a way in which to question production.

Historically, as spaces of the public sphere exhibitions have been sites for aesthetic experimentation, dissemination of materials and confrontation with new technologies, they are often described as a spatial form. Yet exhbitions can also be understood as a time based practice with a particular aptitude for weaving together different registers of temporality which confronts the spectator with the technological and economic contradictions governing display cultures. Weaving in an interdisciplinary language into the vocabulary of exhibitions - such as mise en scene, scenario, choreography and dramaturgy - emphasises the subjective building frame of exhibitions, and denaturalises them.

The importance of time, instability, inconclusiveness and transformation highlights a factor in the way of working of an artist, of a curator, of a writer, who may be activating this time, or times, into an exhibition.

As intermittent thoughts between the three stagings the philosopher Sami Khatib gave a lecture titled ‘Divine Violence and the Ban of the Law’ to address the inherently instrumental role of violence in the formation of ethics and aesthetics in the modern concept of the nation state. Artists Rene Gabri and Ayreen Anastas, and anthropologists Caterina Pasqualino and Arnd Schneider engaged in the conversation ‘Ethnography of the Self: The Status of Everyday Life’ to analyse radical anthropological approaches and modes of observation that have built scenarios of spontaneity, scripting and speculation. With a lecture titled ‘Pirates, exiles, runaway youths, merchants and other migrants in ancient Italy and Plautus: the comedy and reality of a borderless world’ historian Elena Isayev presented an ancient world and a society with no national borders, nor citizenship, defined by territory. Professor of Anthropology and Gender Studies Elizabeth Povinelli took as point of departure the dispute that broke out in the 1960s between the two theorists Gilles Deleuze and Alain Badiou over the role of the philosopher and the procedures of truth, the nature of the event and the possibility of revolutionary politics, to address how pivotal to both was the status, affects, and militancies of love.

Staging One. 'Love Letter to Mars'

During the months of November and December 2014 artists Lara Khaldi and Yazan Khalili presented Staging One. 'Love Letter to Mars', a project whose starting point is an unfinished lecture performance that unfolded formally into various exhibition fragments including works by Dirar Kalash, Maha Maamoun, Gerard Ortin and Young-Hae Chang Heavy Industries. The performance was based on an exchange of letters between two earthly lovers and a fictional character named Waad, who left for Mars in the year 2024 and now plans to reside there for the rest of her life.

Staging One. “Love Letter to Mars” encompassed text, voice, video, photography and sound to present a constellation of aesthetic fragments from Earth, the desert, the Gulf, Palestine, outer space and the red planet. The fictitious yet plausible documentation of life and its ‘urban environment’ that might have existed once, or will do in the future, on Mars gives rise to conflicting opinions regarding their friend’s decision to leave which creates an unsurpassable rift: should they stay and be dedicated to the transformation of planet Earth or, in despair, should they look to shape other communities and colonies elsewhere?

"Love Letter to Mars" was accompanied by a video screening programme titled 'All the Other Lovers', curated by Lara Khaldi and Yazan Khalili, which includes works by Alaa Abu Asad, Jumana Emil Abboud, Basma Alsharif and Monira Al Qadiri.

Staging Two. 'They Went Away to Stay'

On the opening night of Staging Two. 'They Went Away to Stay', Ayreen Anastas and Rene Gabri, with Ben Morea presented a screening partially based on a research trip they conducted in the north of Norway exploring the relation between culture and environment. The screening subsequently becomes a component of a multi-channel performative film whose various parts, or tracks, such as text, reading, sound, noise and visual are distributed in the entire space, interlinked but not always synchronised. This deconstructed film plays a central role in the staging, and includes notes for the script, continuous takes and superimposed sound-tracks which recur in small and larger screens. The film, is hence apprehended differently by every viewer traversing the physical exhibition space, eluding an unanimous edit and even its completion.
According to the artists, the aim is to reach a gestural cinema. This particular approach to individual re-composition and editing is near to an intuitive knowledge (contrary to rational knowledge) and moves cinema from the realm of aesthetics to the realm of ethics and politics. It is a trace of a capacity, not of a decision, of the ability to act and move without limitations.
The overall project brings together footage and research material from Nepal, India, Anatolia, and the Middle East, and Norway, to enter into a dialogue with diverse regions around the world about questions of development and underdevelopment in the global advancing of capitalist procedures on lands and natural resources.

In Staging Three. 'Incidental Insurgents', the artists Basel Abbas and Ruanne Abou-Rahme presented for the first time in Norway a multi-segmented installation entitled The Incidental Insurgents (2012–present) during the months of April and May 2015. The work reflects upon the eclipsing of political radicality and the search for a new political imaginary. In The Incidental Insurgents: The Part about the Bandits and Part II: The Unforgiving Years – the first two chapters of their trilogy – Abbas and Abou-Rahme meld fiction and history to script a complex story about contemporary bandits across the world. From Victor Serge and his clan in 1910’s Paris to Abu Jilda and Arameet and their gang in 1930’s Palestine, these figures point to the incompleteness and inadequacies in oppositional movements today.
The Incidental Insurgents therefore consists of an intricate network of histories, geographies and portrayals which serve as material for Abbas and Abou-Rahme to elucidate how – like the bandits before them – they find themselves ‘inhabiting a moment of full radical potential and disillusionment, in continual search for a language for the present moment’.