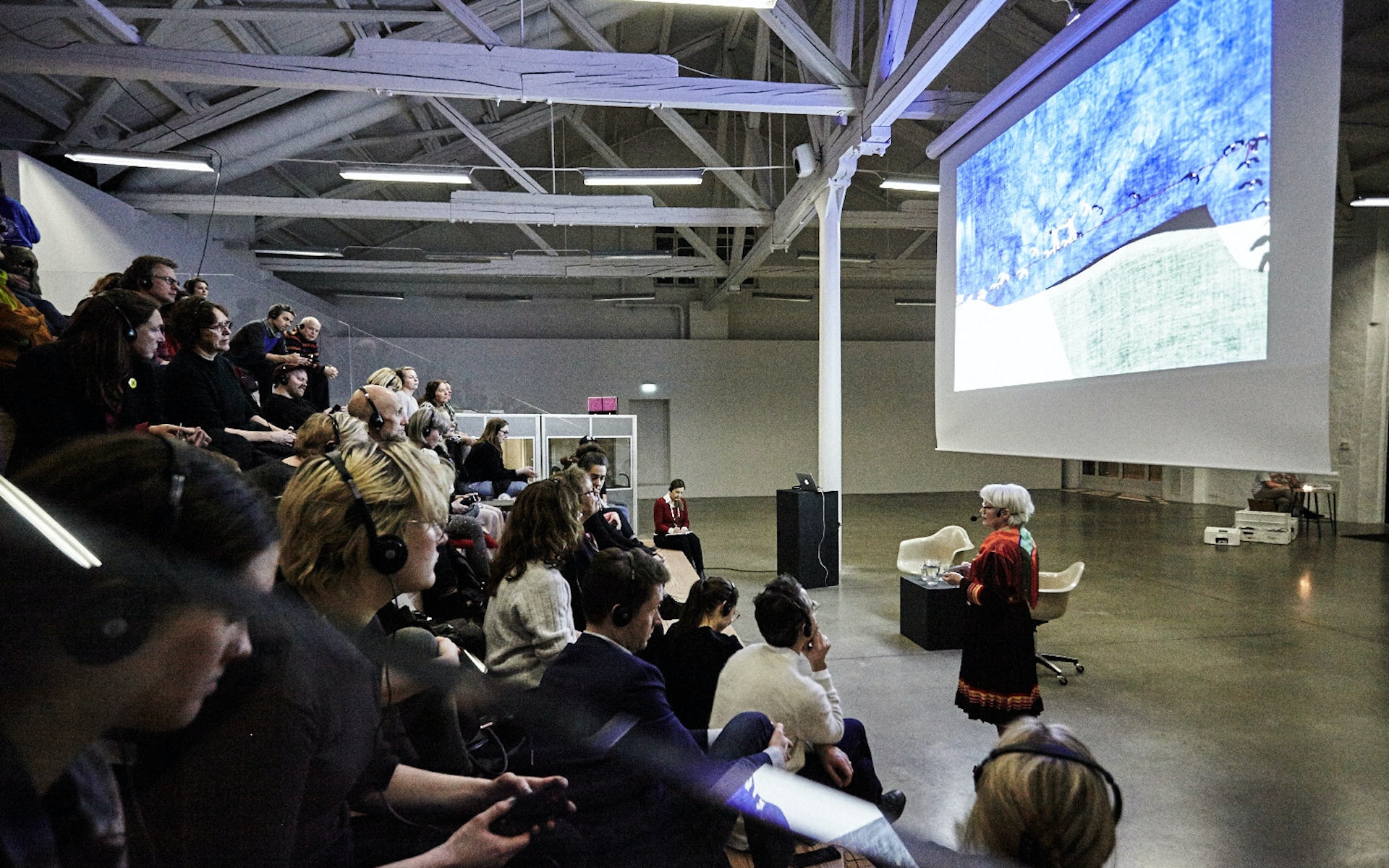 A presentation by the artist and former member of the Mázejoavku: Sámi Dáiddajoavku (Sámi Artists’ Group) Britta Marakatt-Labba, with introductory words from Karin Hindsbo, Director of the National Museum of Art, Architecture and Design in Oslo. Marakatt-Labba was the recipient of the John Savio Prize 2017, given to a Sami artist as a recognition of his or her practice. The prize is allocated by The Relief Fund for Visual Artists (Bildende Kunstneres Hjelpefond), and organised in collaboration with Sámi Dáiddáčehpiid Searvi – SDS (Samisk kunstnerforbund / Sami Artists’ Union) and the Northern Norwegian Art Museum (Nordnorsk Kunstmuseum). The official ceremony for the presentation of the award was held at the Northern Norwegian Art Museum in Tromsø on 21 September 2017.

Britta Marakatt-Labba elucidated her storytelling process, built through embroidered images, a technique inherent to her Sami heritage, which allows her to ‘move easily’ and be mobile with the work she is doing at any given time.

Growing up with ‘duodji’ (Sami crafts), textiles constitute a common thread throughout Marakatt-Labba’s life, highlighting the artist’s refusal of the prejudices constructed against Sami culture. By conveying an image of the world she is part of, she provides an understanding of Sami culture and history with which to illuminate its future.

The numerous embroideries and other work that she has produced since the 1970s have highlighted nature, Sami living conditions, spiritual perspectives and mythology, fairy tales and sayings, as well as both political and everyday events. Today this entire belief system is under threat, as Sami and Indigenous peoples globally are the first to be menaced by the consequences of changes in climate and the environment due to the massive mining exploitation and industrialisation of nature. Britta Marakatt-Labba, who lives in one of these emblematic areas, will speak about her over forty-year commitment to these pressing issues.

Britta Marakatt-Labba is a visual artist living in Övre Soppero, Sápmi, Northern Sweden. She grew up in a family of reindeer herders and then studied art at Sunderby Folkhögskola and at the School of Design and Crafts at the University of Gothenburg, receiving a Bachelor’s Degree in Textile Art in 1978. Marakatt-Labba became a member of the influential artist collective Mázejoavku: Sámi Dáiddajoavku (Sámi Artists’ Group 1978–83) in 1979. Her primary medium is embroidery and her epic, 24-metre-long piece Historja (2003–07), which narrates the history and cosmology of the Sami people, was featured in the documenta Halle in Kassel as part of documenta 14. She has exhibited widely, both nationally and internationally. In addition to having fulfilled many public commissions, Marakatt-Labba has worked extensively with book illustrations, scenography and graphic design. The retrospective ‘Cosmos’ at the Bildmuseet in Umeå in 2008 included over 100 of her works, and a major monograph, Embroidered Stories. Britta Marakatt-Labba (Broderade berättelser. Britta Marakatt-Labba), was published in 2010. Marakatt-Labba’s work forms part of many public and private collections throughout Scandinavia.

The Relief Fund for Visual Artists (BKH) was established in 1948 by the Norwegian Parliament, The Relief Fund for Visual Artists (Bildende Kunstneres Hjelpefond) is an organisation that provides project support, grants and scholarships to artists working in Norway. BKH collaborates with local institutions throughout the country with the aim to strengthen Norwegian art production. BKH also administers The John Savio Prize in addition to four other major art awards. The prize is named after one of the most influential Sami artists, John Savio (1902–38). Having disbursed funds for almost 400 million NOK since its inception, the BKH is a major economic partner on the Norwegian art scene, making an important contribution to ensuring artistic diversity and innovation throughout the country. The funds are generated through a five percent tax on all public sale of art and art commissions in Norway.