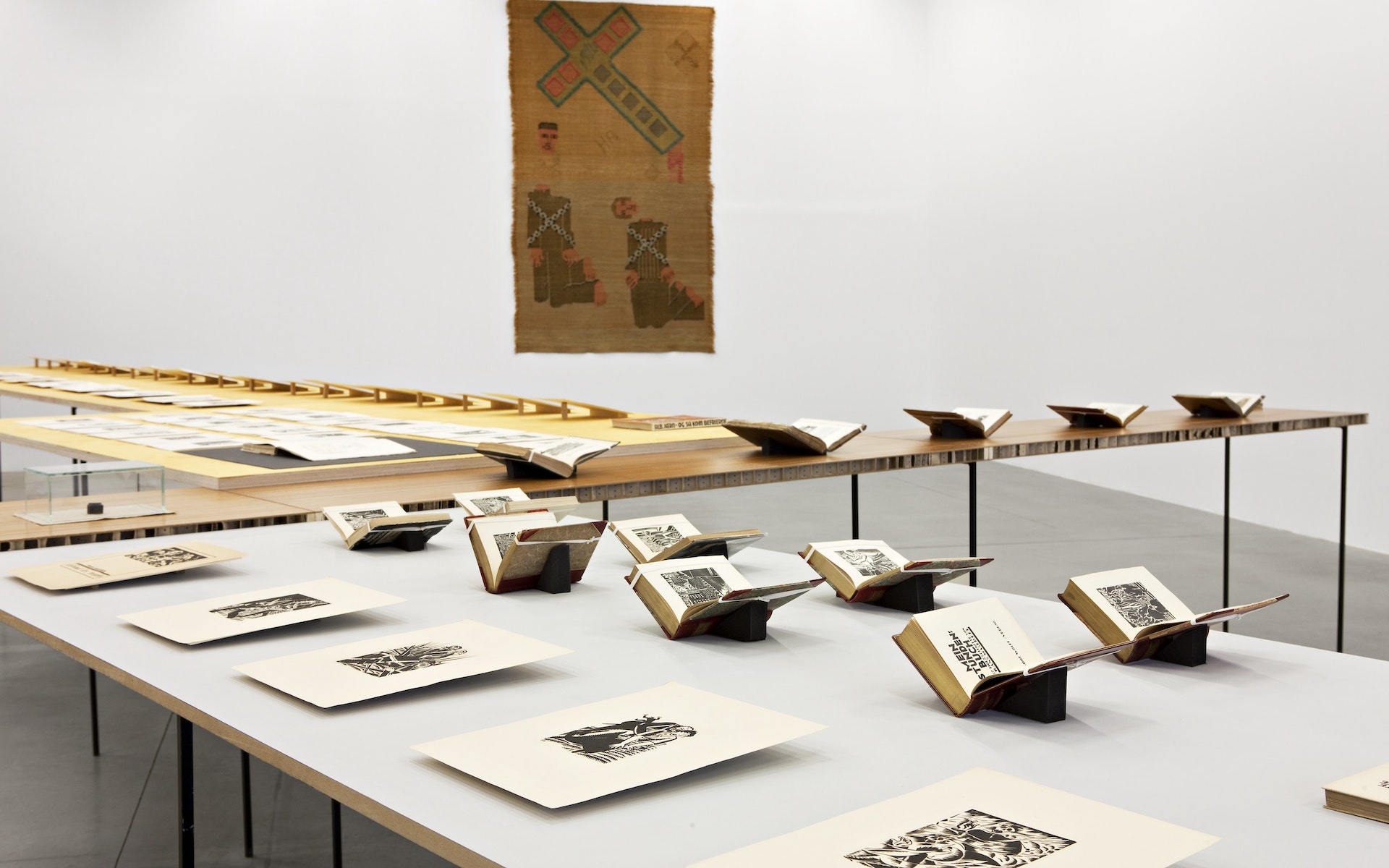 Forms of Modern Life: From the Archives of Guttorm Guttormsgaard

To see, to refuse to shut one's eyes, in our time ... that is to accuse, to threaten.[...] the world is so made that to see is to believe.'
— Nordahl Grieg, Defeat: A Play on the Paris Commune

'Forms of Modern Life' considers the process by which the graphic form becomes, in the nineteenth and twentieth centuries, a universal, egalitarian form of expression, moved both by a development of formal and technical concerns and by the intention to communicate to wider audiences and heighten art's political efficacy. The project explores how artists such as Thomas Bewick, Frans Masereel and Albert Jærn in printed form, Hannah Ryggen through her tapestries and Peder Balke and Lars Hertervig in their paintings employed graphic forms to address the world in which they lived, picturing their environment and the cultural and political changes of their time, and trying to intervene in their contexts by combining narration and the vernacular and embracing the role of the artist as a modern, self-reflective subject.

The project draws from and expands upon Guttorm Guttormsgaard's archives, which includes publications and printed matter that Guttormsgaard has gathered from nearly six centuries of history, in an attempt to always select 'the modern'. Reflecting this principle, the artists included in 'Forms of Modern Life' all share the goal of increasing consciousness and through it the agency of those whom their work reaches. They also have in common a will to overcome existing barriers to cultural production in the form of technical means and subjects, codes, languages and ideas. The project pays special attention to the intimate relation of these artists' graphic forms to technique: reflecting, for example, on how Bewick, Jærn and Masereel took advantage of technical innovations and new forms of production and distribution to make their work available to those who couldn't afford costly publications — the masses of people who, since the industrial revolution, emerged as a fundamental political force.

Following the impulse of print capitalism, these artists created a new vernacular that reached audiences whose size was previously unheard of. Bewick's reflection on the common within his miniature vignettes of landscape and everyday life, Masereel's direct portrayal of the working class in the modern city, or Jærn's depiction of the Nazi occupation of Norway combined a critical approach to their own society with a democratising impulse. The project integrates the work of other artists who had recourse to traditional techniques instead, in order to reflect an engagement with popular, vernacular and proletarian forms of culture. For instance, Lars Hertervig rendered his gouaches of female riders and stags on leftover, industrial materials such as tobacco or wrapping papers, and Peder Balke, a member of the radical workers' movement, revisited national romanticism by means of small-scale landscapes. The exhibition also includes two tapestries by Hannah Ryggen from the 1930s, in which the artist weaves concrete social and historical relationships between figures and settings in order to portray and denounce the emergence of fascism in Norway and Europe. Despite the differences between these artists' work, their approaches to naturalism and figuration offer an intense tactile and textural intimacy, creating a tension between motif and form that urgently responds to the dialectics of modern life.

The materials included in the exhibition are on loan from Guttorm Guttormsgaard's archives, with additions from the collection of Kristine Jærn Pilgaard and the Norwegian National Museum of Art, Architecture and Design. The exhibition is curated by OCA's director Marta Kuzma and OCA's associate curator Pablo Lafuente, with additional research by OCA's Senior Coordinator, Marthe Tveitan, and Research Associate, Tonja Boos. The project production and design is developed by Gunnar Moen and Asle Olsen.

'Forms of Modern Life' is supported with a generous grant from Fritt Ord in Oslo.