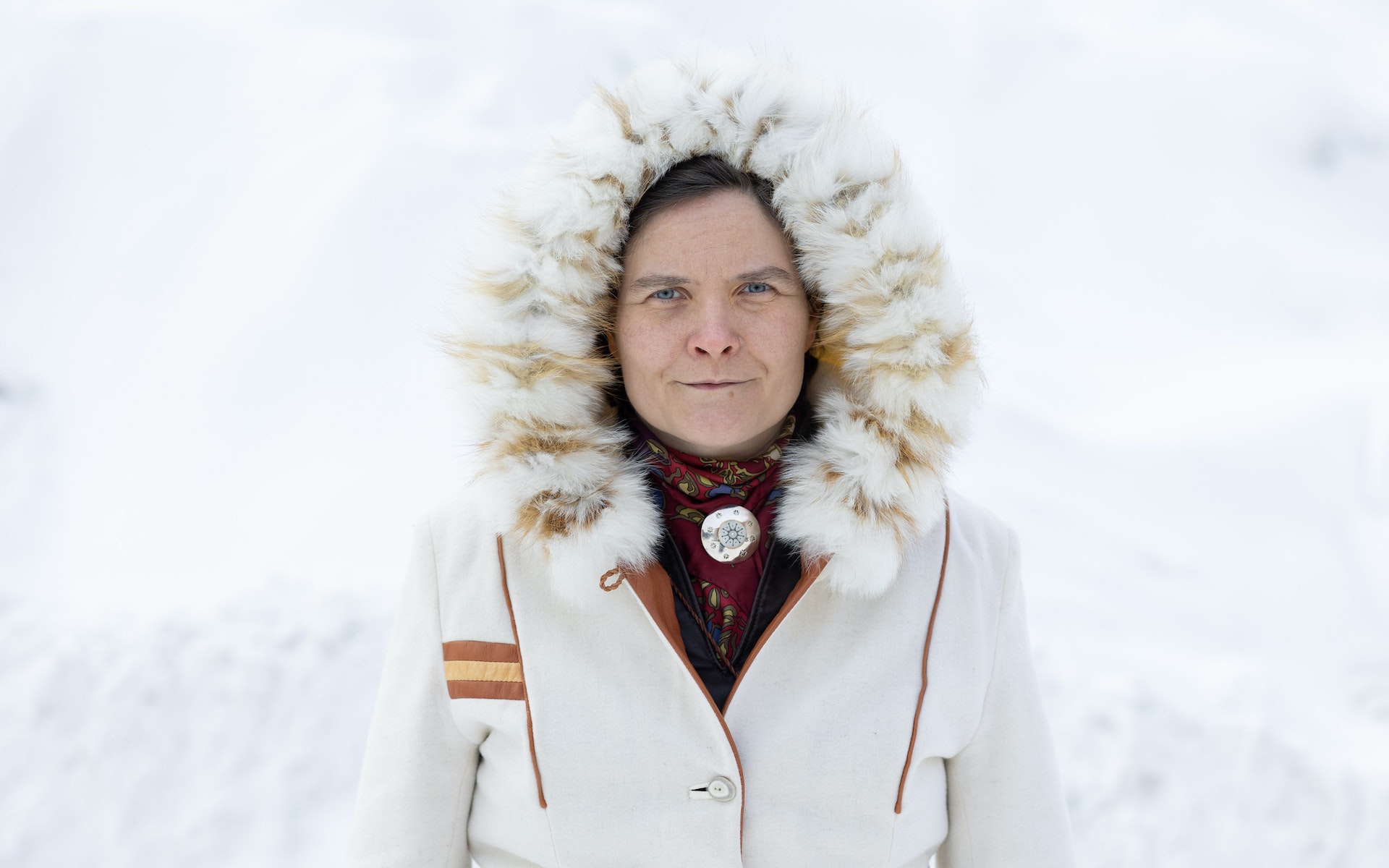 Finland has treated the ancestral land we have lived in for centuries as their natural resource to exploit and sell piece by piece to any market that needs it. Sámi forests are logged for toilet paper. I have spent my life documenting all the losses on multiple levels, but now it’s vital to focus on what we still have and how to make it stronger. When the earth is transforming, life needs havens and time to adapt. My work proposes ways to protect the last remaining old growth forests and let the logged areas have a time to heal. Our message is, please do not buy our land, buy our art instead.

Feodoroff is a Skolt Sámi theatre director, artist and land-guardian whose long-standing practice reverts the impact of two interconnected processes endangering Sámi futures. On the one hand, the industrial deforestation of old growth forests causing the collapse of rivers, fishing customs, and the lichens reindeer feed on. On the other hand, state-led privatisation of land that destroys the collective models of existence and care underpinning Sámi society. Matriarchy is a collective performance of healing and renewal, conceived as a process of rematriation to return to a world of kinship between people, land, waters, spirits, and other-than human beings.

“Indigenous and non-Indigenous peoples have never properly greeted each other”, as Feodoroff explains when describing the first part of the performance, titled First Contact. The epistemic violence this has generated continues to define the assymetric relations between these worlds today. In this first section, the performance contrasts colonised and Indigenous gesturality. On the one hand, submission is choreographed to highlight how colonial layers of violence inhabit Indigenous bodies. On the other hand, the practice of gift-giving is enacted as a central element of Sámi philosophy, that guides the relations of care between Indigenous people, with lands and other entities, and that were mistaken by settlers as an acceptance of domination, and subsequently transformed into forms of colonial taxation and control.

Part two, Auction, presents images of Sámi landscapes currently under threat from commercial logging. These land(person)scapes, portraying the land and related guardians, are ‘auctioned off’ as artworks during the performance, setting the scene for the actual sale of the works that is happening in real time, as a parallel process of the project. The funds raised are channelled through the Snowchange Cooperative (an NGO and network of scientists and Sámi knowledge holders) to purchase and restore these landscapes and their communities. The buyers (museums and collectors) are bound in a relationship with Feodoroff and the land guardians, that gives buyers the chance to view these protected lands in the future. In between performances, the images will be on permanent display in the pavilion as a video installation presenting the land(person)scapes for sale, and a land(person)video drawn from the rehearsals on the land that led to the performance.

In part three, Matriarchy, Indigenous female bodies converge in actions that ask us to be aware of our responsibilities in a world of relations. The performance centres matriarchal values of care and collective models of existence to restore sovereign forms of living in Sámi society.

Pauliina Feodoroff (b. 1977) is a Skolt Sámi theatre director, artist and land guardian from Keväjäu’rr in the Finnish part of Sápmi and Suõ’nnjel, in the Russian part. She connects various fields of knowledge – Sámi, artistic, scientific – in theatre and film projects and also in political activism and ecological restoration projects. She is known for the film Non Profit, 2007, and the play CO2lonialNATION that premiered at Giron Sámi Teáhter, 2017, which questioned colonisation and its consequences in Sápmi through a ‘Theatrical Truth Commission’. She gained a Masters in theatre direction and dramaturgy from the Helsinki Theatre Academy in 2002 and has worked as the artistic director of Takomo Theatre and the Rospuutto Theatre Group, both in Helsinki, Finland. For the theatre festival Baltic Circle Helsinki in 2017 she curated the artistic and discursive programme ‘Vuosttaš álbmogat / First Nations’ which concentrated on colonisation in the Nordic countries. Several Sámi artists, including Anders Sunna, participated in the programme.

Feodoroff’s family are Skolt Sámi reindeer herders originally from Suõ’nnjel on the Kola peninsula in the Russian part of Sápmi but were forced to move to the Finnish part when the Russian borders were re-drawn and closed in 1944. She was born in Keväjäu’rr on the Finnish side but considers the dispossessed lands as her ancestral homeland. Feodoroff is an advocate for Sámi water and land rights and has served as President of the Saami Council. She co-drafted the mandate for the Truth and Reconciliation Commission in Finland in 2019.

Her current work is concerned with industrial deforestation and its role in the collapse of the biodiversity of rivers and fishing customs. Her practice is also concerned with the role of modernisation and government policies in destroying the collective models of existence and care for the land that underpin Sámi society. She has worked to preserve reindeer herding in forests on the Finnish side of Sápmi and has investigated the impact of land extraction by mining companies in the Russian part of Sápmi. Feodoroff is an active collaborator with the Snowchange Cooperative, particularly on the project ‘Näätämö River Co-management Plan’, where she coordinates the ecological restoration and management project of the Njâuddam (North Sámi: Njávddam, Finnish: Näätämö, Norwegian: Neiden) river system, a vital river on the Norwegian and Finnish sides of the Skolt Sámi areas. The project aims to use Sámi land-care practices and local and scientific knowledge to protect and restore the waters, fish spawning areas and the surrounding land of the river. In 2018 this inspired the cross-disciplinary project ‘What Form(s) Can an Atonement Take’. In 2019 the restoration of the river Vannikkeejokk and a small rapid called Kirakkakoski in lake Kââ'rekjäu'rr was completed.

In 2015 she collaborated with Snowchange Cooperative on a performance in Sápmi entitled Life in the Cyclic World (Our Songs Have to Change) if We Wish to Change for the Rospuutto Group, which raised awareness of the Climate Change Risk Assessment Report and pushed for the publication of a scientific article written by Tero and Kaisu Mustonen called 'Life in the Cyclic World'. The article provides witness statements by Indigenous peoples of the North about climate change and their interpretations of what climate change is. The CAFF Process commissioned the report, but would not publish it without editing, which the Indigenous communities involved disagreed on. With Feodoroff and Snowchange’s efforts, the report was published in 2016.

Feodoroff has contributed to several book projects including Queering Sápmi, a project by Sarah Lindquist and Elfrida Bergman that challenges gender norms and offers storytelling about the lives of queer Sámi persons, and the Eastern Sámi Atlas by editors Tero Mustonen and Kaisu Mustonen, published by the Snowchange Cooperative, 2011.