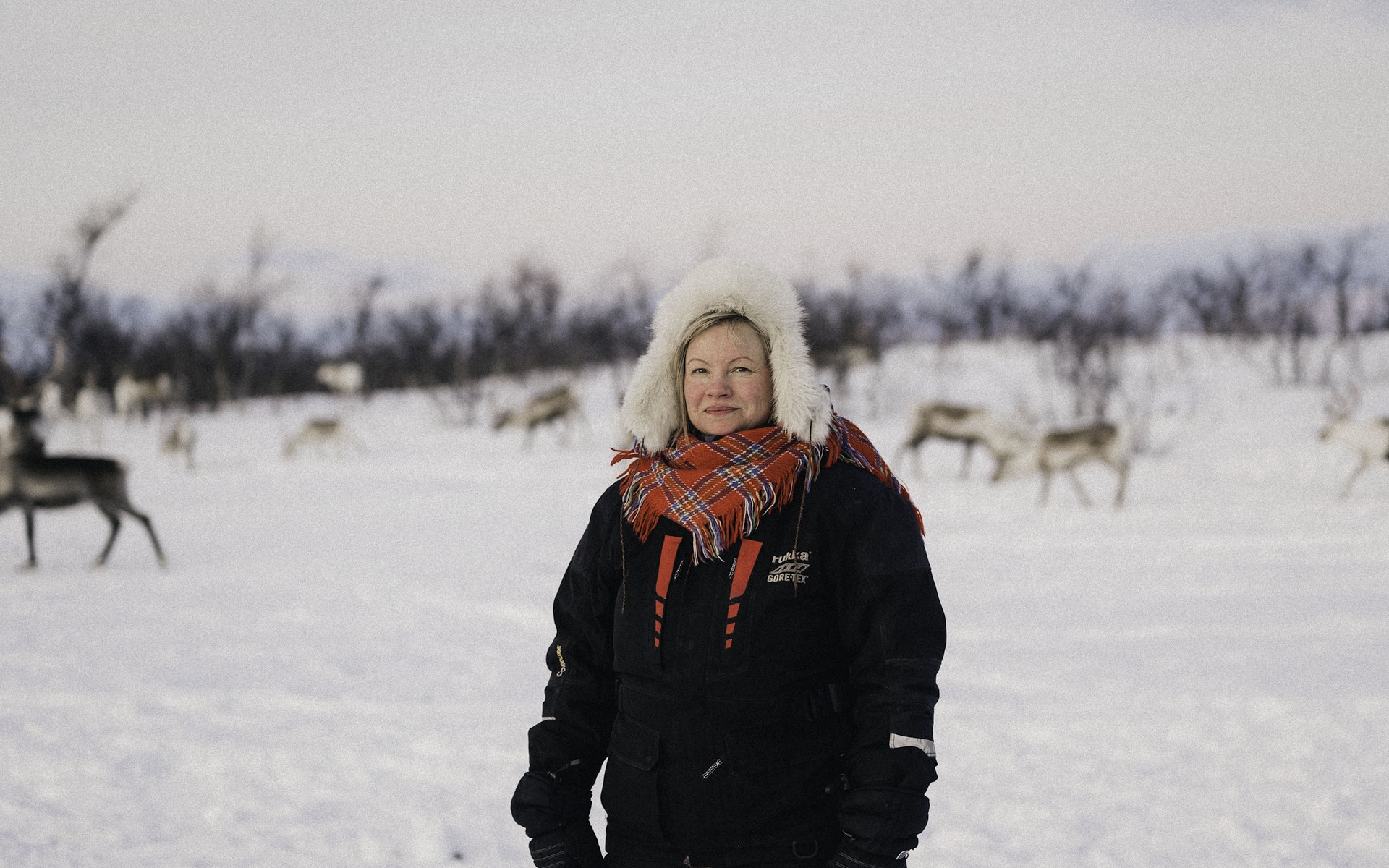 Smells created in collaboration with Nadjib Achaibou and Oswaldo Maciá.

After the long and hard struggle our family has been through against the Norwegian state to protect our reindeer from forced slaughtering, I have a strong need to seek and manifest faith and hope. I tell my stories through the reindeer because what happens to the reindeer also happens to us. From an Indigenous perspective, I don’t see humans as superior or central. As human beings on this earth, we are simply a part of an interconnection of life forms and the constant dialogue and interdependence between these. My work asks questions about what happens when outside powers enforce laws upon you that systematically force you to break your own and collective ethics and morals, epistemology and philosophy. When your sanity is criminalised, how do you counter and continue?
—Máret Ánne Sara

Based in Guovdageaidnu, in the Norwegian side of Sápmi, Sara comes from a tundra reindeer herding family. The three works presented in the pavilion were conceived in the aftermath of a seven-year legal battle with the Norwegian state to defend the herding rights of her younger brother, one of the many court cases experienced by young Sámi reindeer herders today. Sara’s focus on the reindeer as the cornerstone of Sámi life is intended to heal and repair the inflicted trauma. The works were made following Sámi ethics and methods of sustainable resource use, finding value in reindeer parts not used for food and clothing; the animals presented died a natural death.

Gutted – Gávogálši is a constellation of dried reindeer stomachs addressing Sámi spiritual and material forms of knowledge and kinship. The work highlights the stomach as a first site of emotion to events in the world and underlines their sensate power as a parallel intelligence that connects humans, reindeers and other life. This gamus dovdat and čoalit dovdet, which translates as ‘we know by instinct’ and ‘gut feeling’, is highly valued by Sámi philosophy. Each stomach represents a person responsible for the conflicts recently experienced by the Sara family; in so doing, the artist redirects the trauma back onto the perpetrators, cleansing herself and her family from it.

Ale suova sielu sáiget is a rotating sculpture composed of cured calves and dried plants from the tundra, conceived as a carrousel of death and birth, fear and joy, trauma and hope. It was created whilst the artist was carrying her first-born and considered the future of Sámi youth in a colonially unbalanced world. Through the work the artist grieves the loss of the red newborn calves to state-imposed pressures (such as the effect of environmental laws over protecting alpha predators) as well as to starvation resulting from the growing impact of climate change; she rejoices in each calf born as the carrier of new life, as a continuation of the herd and of the Sámi people.

Du-ššan-ahttanu-ššan consists of two suspended, cloud-like forms of reindeer sinews, imbued with smell, as an elementary part of the non-verbal communication that happens between lifeforms and their surroundings. The smell in one of the forms conjures the ongoing stress and fear experienced by humans and reindeers during colonising processes; and in the other, the hope needed to resist and generate a new future.

Máret Ánne Sara (b. 1983) is a Northern Sámi artist and author from Guovdageaidnu in the Norwegian part of Sápmi. Sara is a founding member of the Dáiddadállu Artist Collective in Guovdageaidnu and is part of a new generation of Sámi artists who work to maintain and improve the rights of the Sámi communities. She is known for experimenting with varied materials, approaches and collective art actions, and her artistic practice makes visible the political and social issues affecting the Sámi people, especially the reindeer herding communities, with a critical view on ongoing colonialism. Her sculptures and installations are often made from materials deriving from the sustainable practice of her reindeer herding family, treating the bones, hide and intestines of the reindeer in the customary manner and transforming them into contemporary artworks.

Sara is best known for the piece Pile o’Sápmi, an installation of 400 reindeer skulls and legal documents, showcased at documenta14 in Kassel, 2017. The installation was recently purchased by the National Museum, Norway. Pile o’Sápmi is also the title of an ongoing art project and protest movement involving fellow Sámi artists in solidarity with Sara's brother Jovsset Ánte Sara, in his contestation of the Norwegian government in court.

The title of this project refers to Pile o’ Bones, the English translation of the Plains Cree name for Regina, Canada (Oskana ka-asastēki) and also referencing the photos of millions of buffalo heads that white settlers slaughtered in order to starve the Indigenous populations of North America. Pile o’Sápmi has taken various forms, as installations with reindeer skulls, and as jewellery pieces made from reindeer bone porcelain (pointing to bone china, a British invention
imitating porcelain by using buffalo bones as raw material). As her brother’s court cases proceeded, Sara installed various versions of Pile o’Sápmi in relation to the different trials, with installations outside the District Court in Deatnu/Tana, the Court of Appeal in Romsa/Tromsø and in front of the Norwegian Parliament in Oslo during the trial at the Supreme Court.

The various versions have also been exhibited at Tenthaus, Norway; The Queen Sonja Art Stable, Norway; Kunstnerforbundet, Norway and Nuuk Art Museum, Kalaallit Nunaat/Greenland. Pile o’Sápmi Power Necklace was displayed in the exhibition ‘Let the River Flow. The Sovereign Will and the Making of a New Worldliness’, curated and produced by OCA in 2018. Sara is currently featured with a new commission and a series of previous works in the exhibition ‘Environmental Injustice - Indigenous Peoples’ Alternatives’ at Musée d’ethnographie de Genève, Switzerland.

Since studying illustration at Arts University Bournemouth, UK, the artist also works extensively with collages and prints depicting madness and anger at governmental power abuse through the expressive use of Sámi symbolic and identity markers. Sara has also worked as journalist and editor of the Sámi youth magazine Š, and has published two novels, Ilmmiid gaskkas (In between worlds), 2013, and Doaresbealde doali, 2014. She was nominated for the Nordic Council’s Children and Young People’s Literature Prize 2014 for Ilmmiid gaskkas, her debut novel, which was published in Northern Sámi, Norwegian and English.