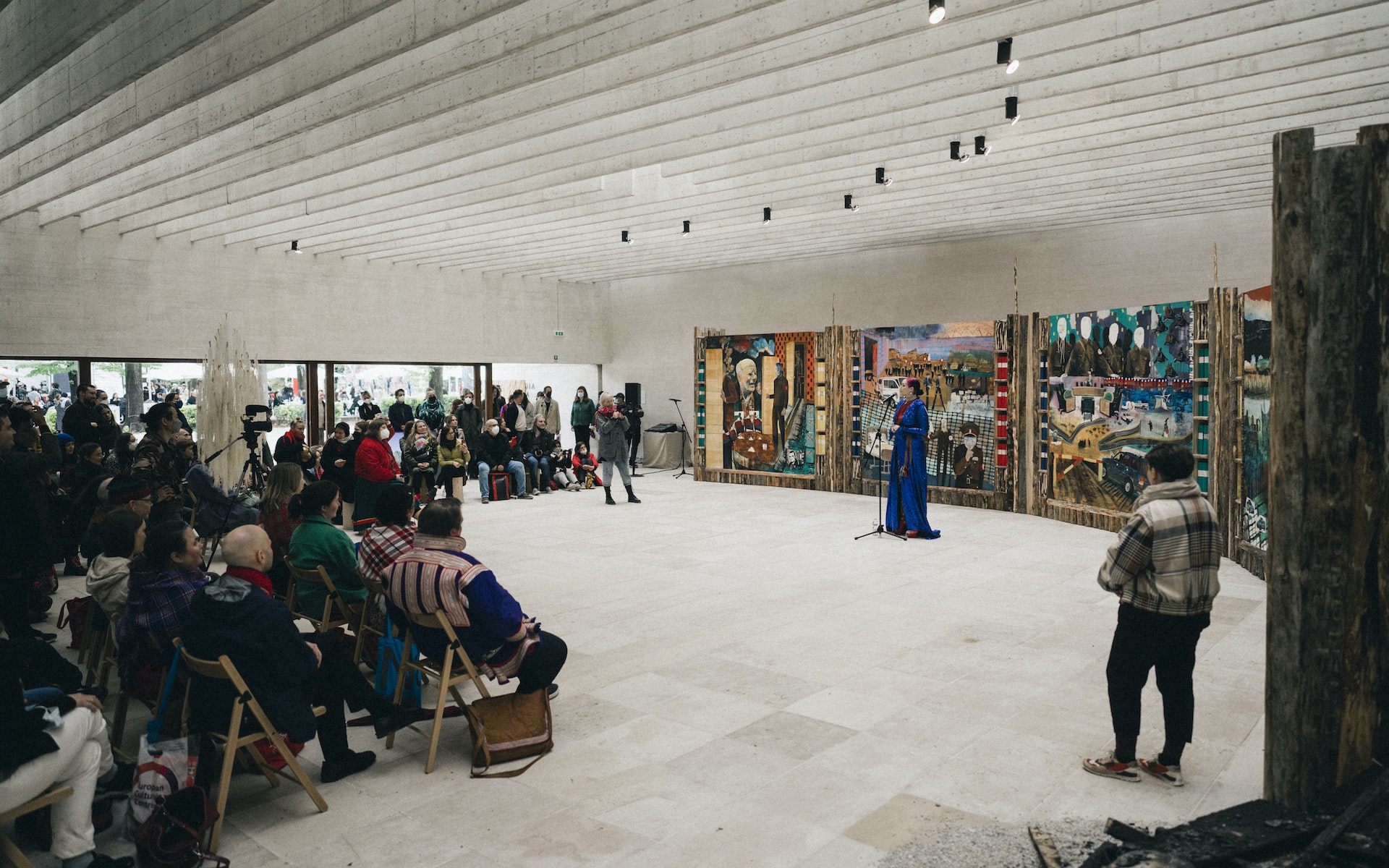 Extended programme of 'The Sámi Pavilion'

aabaakwad, the art world’s foremost Indigenous-led gathering, took place for the fourth time during April 22-25, 2022, as part of the extended program of ‘The Sámi Pavilion’ project under the 59th International Art Exhibition of La Biennale di Venezia. Bringing together more than 100 artists, writers and curators from more than 25 First Nations and seven countries, aabaakwad 2022: ‘The Sámi Pavilion’ arrived in Venice to celebrate the Nordic Pavilion’s historic recognition of the art and sovereignty of the Sámi people, with four days of free events. Independently organized, artist centered and Indigenous-led, the gathering is co-presented by the Art Gallery of Ontario (AGO) and Office for Contemporary Art Norway (OCA).

Happening at the Don Orione Cultural Centre, with additional events at Ocean Space and the Conservatorio di Musica Benedetto Marcello di Venezia, aabaakwad 2022: ‘The Sámi Pavilion’ opened on Friday, April 22 with a series of conversations on nationhood and artmaking featuring artists Sonia Boyce and Brett Graham, as well as musical performances by Kulleh Comrade and Jeremy Dutcher. The keynote was delivered by ‘The Sámi Pavilion’ artists Pauliina Feodoroff, Máret Ánne Sara and Anders Sunna in conversation with their knowledge keepers.

Previously presented in 2020 at the Sydney Biennale, and in 2021 at the AGO, aabaakwad 2022: The Sámi Pavilion is generously supported by the Australia Council for the Arts, BLAK C.O.R.E, an initiative of Museums & Collections at the University of Melbourne, the Canada Council for the Arts, Ocean Space, Riddu Riđđu Festival, Stardust Arts, Terra Foundation for American Art and TBA21- Academy.

Six filmmakers have been chosen to represent the vibrant development of Sámi storytelling as a part of the ÁRRAN 360° exhibition, which will have its world premiere as part of ´The Sámi Pavilion´ at the 59th International Art Exhibition of La Biennale di Venezia on 26th of August 2022. Initiated by ISFI, in collaboration with OCA and NFI.

Co-produced with Schmidt Ocean Institute, co-founded by Eric and Wendy Schmidt, and in collaboration with The Sámi Pavilion at the 59th Venice Biennale in 2022, the Office for Contemporary Art Norway, and aabaakwad, the Ocean Fellowship 2022 gathers participants to consider our kinship and duties of care toward the Ocean and its relations in multi-species communities and with diverse lifeforms. What are our responsibilities toward the Ocean? How can thinking from the Ocean build radically inclusive environments? Indigenous perspectives are brought to the center of our work to define resurgent values, forms, and stories and intertwine knowledges of the past, present, and futures of the Ocean we are all in relation with and dependent upon.

During the opening week of 'The Sámi Pavilion' a collaboration between Sámi Centre for Contemporary Art (SDG), Office for Contemporary Art Norway, the Sámi Parliament and the Sámi Council was launched aimed at explores the potential of curatorial practices to be defined from Sámi perspectives, laying the ground for future opportunities of empowerment in the field. 'Sámi Curating and Sovereign Futures' is a pilot project taking place in Venice between 19th-25th April 2022, and including a special programme drafted together by the collaborating partners, in the context of ‘The Sámi Pavilion´ and its extensive programme, as well as the many pavilions and exhibitions to view in La Biennale di Venezia 2022. Following an Open Call the jury selected the participants Petra Unni Risten Laiti, Sunna Maaret Nousuniemi, Sandra Márjá West, Anders Rimpi, Berit Kristine Andersen Guvsám, Laila Susanna Kuhmunen, Anne Henriette Nilut and Kare Raija Anti.