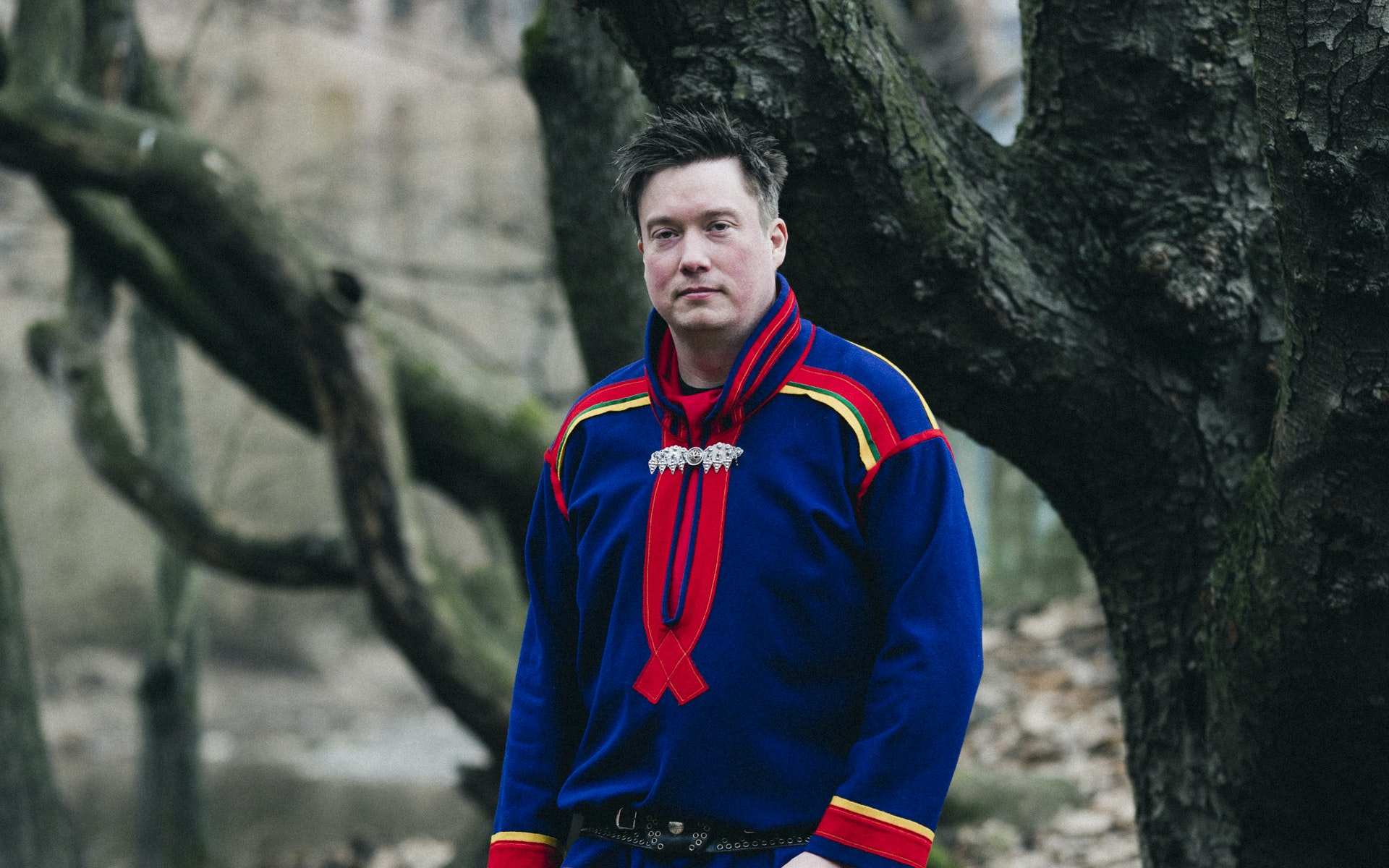 Imagine being able to speak all the world’s languages without saying a sound. To reach people’s hearts first and then their consciousness. The anger you are carrying suddenly finds a way to emerge but in a more creative form, stronger than iron. Art is that.

Sunna comes from a family of forest reindeer herders, in Kieksiäisvaara on the Swedish side of Sápmi, whose ancestral reindeer herding life has been progressively affected by centuries of colonization. In 1971 the Swedish state passed a law that breaches international conventions protecting Indigenous peoples’ rights, and deeply affected herders. The Sunna family’s resistance kicked off in earnest at this time. Over the last 50 years it has grown in determination as the state removed the Sunna reindeer ear marks, inherited across generations, making them into outlaws on their own land.

Illegal Spirits of Sápmi bears witness to this story, each painting addressing consecutive decades. The last, presented as burnt remains after Sunna set fire to it, proposes the sixth decade as an empowered and healed future. The paintings are displayed in free-standing units, hand-built with his brothers, with folders documenting the numerous court cases marking their struggle that can be consulted by the visitors. Six sonic dioramas accessed through QR codes, offer spatial and sensorial depth to the narration through layered excerpts from the family sound archive of courtroom proceedings, field recordings, music environments, dialogues and a performative voice.

The paintings use collage as a structuring device to present the many threads of the Sunna’s experience; the juxtaposed images take a literary form as a Sámi counter-narrative of history and of colonial Sweden. They have a documentary impulse, portraying the figures responsible for the conflict and depicting specific instances of it in a pictorial language legible to the Western eye. However, they are also coded with symbols drawn from Sámi spiritual knowledge. For example, in the first painting Sunna reveals the power asymmetry of the courtroom, bearing witness to ‘the persecution that took away our nourishment and culture ... [so that the] Sámi would become slaves and Swedes lords over the Sámi.’ However, at the centre of the image the artist portrays the Sámi goavddis, the sacred drum. Burnt, stolen and banned by colonisers the goavddi’s presence here is an act of spiritual resistance and familial empowerment, as visible (and protected) within it are images of his relations taken from the family album.

Earlier this year the Swedish Church offered a public apology for centuries of misdoing to the Sámi people, Sunna was commissioned to prepare the visual staging for the ceremony. In addition, Sweden has started to prepare for a Truth and Reconciliation Commission addressing Nordic colonialism (Finland and Norway have already launched theirs). Within this context of spiritual and political transformation the Sunna family’s personal and collective call demands that Sámi ways of being, doing, seeing and thinking, across all nation state borders that traverse Sápmi, be honoured.

Anders Sunna (b. 1985) is a Northern Sámi artist from a reindeer herding family in Kieksiäisvaara, in the Swedish part of Sápmi. Sunna’s politically charged artworks narrate the history of the violence and oppression against the Sámi people and very specifically address his family’s five-decade long struggle for their right and acknowledgement to be forest reindeer herders. Due to governmental politics, the family lost their reindeer ear marks, a customary practice that designates ownership of reindeer and the right to work as a herder. Sunna calls himself a ‘guerrilla reindeer herder', using his artistic practice to empower the Sámi community. With powerful imagery and political satire his paintings, graffiti, sculptures and installations depict how the abuse of authority and power lead to the exploitation of land and natural resources, forced displacement, and racial persecution of the Sámi people.

Sunna was featured in the exhibition ‘Àbadakone / Continuous Fire / Feu continuel’, in the National Gallery of Canada, 2019, and the 22nd Biennale of Sydney, NIRIN, 2020, both focused on Indigenous artists. For NIRIN he was commissioned to make a site-specific mural at the Campbelltown Arts Centre. The mural, titled SOAÐA, was created on-site in dialogue with local Aboriginal elders in Campbelltown, Australia. Sunna had two solo exhibitions in 2020: in Adde Zetterquist Art Gallery, Saltdal, in the Norwegian part of Sápmi, and ‘Exploration Target – Area Infected’ at Varbergs Konsthall, Gothenburg, Sweden.

Sunna was part of the Bergen Festival Exhibition 2020 at Bergen Kunsthall with a painting commissioned by and in collaboration with Sámi artist Joar Nango (the main Festival Exhibition artist). Sunna studied fine arts at the Konstfack College of Arts in Stockholm during 2006–2009 and at the Umeå Academy of Fine Arts 2004–2006. He has been commissioned to create a range of public artworks, amongst others at the Sámi University College in Guovdageaidnu and the Alta secondary school in the Norwegian part of Sápmi; and notably in the courtroom in the district court in Gällivare, Swedish part, 2013, where many legal cases on Sámi issues continue to be raised today. In 2016 he collaborated with Máret Ánne Sara on stage visuals for the concert ‘Lapp Affair – Unfinished Business’ at the Arctic Arts Festival in Harstad, Norway. He has also collaborated with the Sámi musician Sofia Jannok with a graffiti performance for her music video ‘We Are Still Here’, 2016. He was selected for the Moderna Exhibition 2018 titled ‘With the Future Behind Us’. When the Swedish church made an official apology towards the Sámi people on 24 November 2021 for its role in ‘legitimised repression' and centuries of ‘mistreatment and complacency' toward the Sámi People, Sunna created two new commissioned portraits as scenography.

Sunna’s works have been exhibited widely in Sápmi and internationally. OCA presented Sunna in 2017 when he made the scenography exhibition in connection to ‘Museums on Fire!’, a symposium considering the entanglement of the colonial legacy of art institutions, with the spaces and processes through which Indigenous artistic practices, past and present, are addressed.