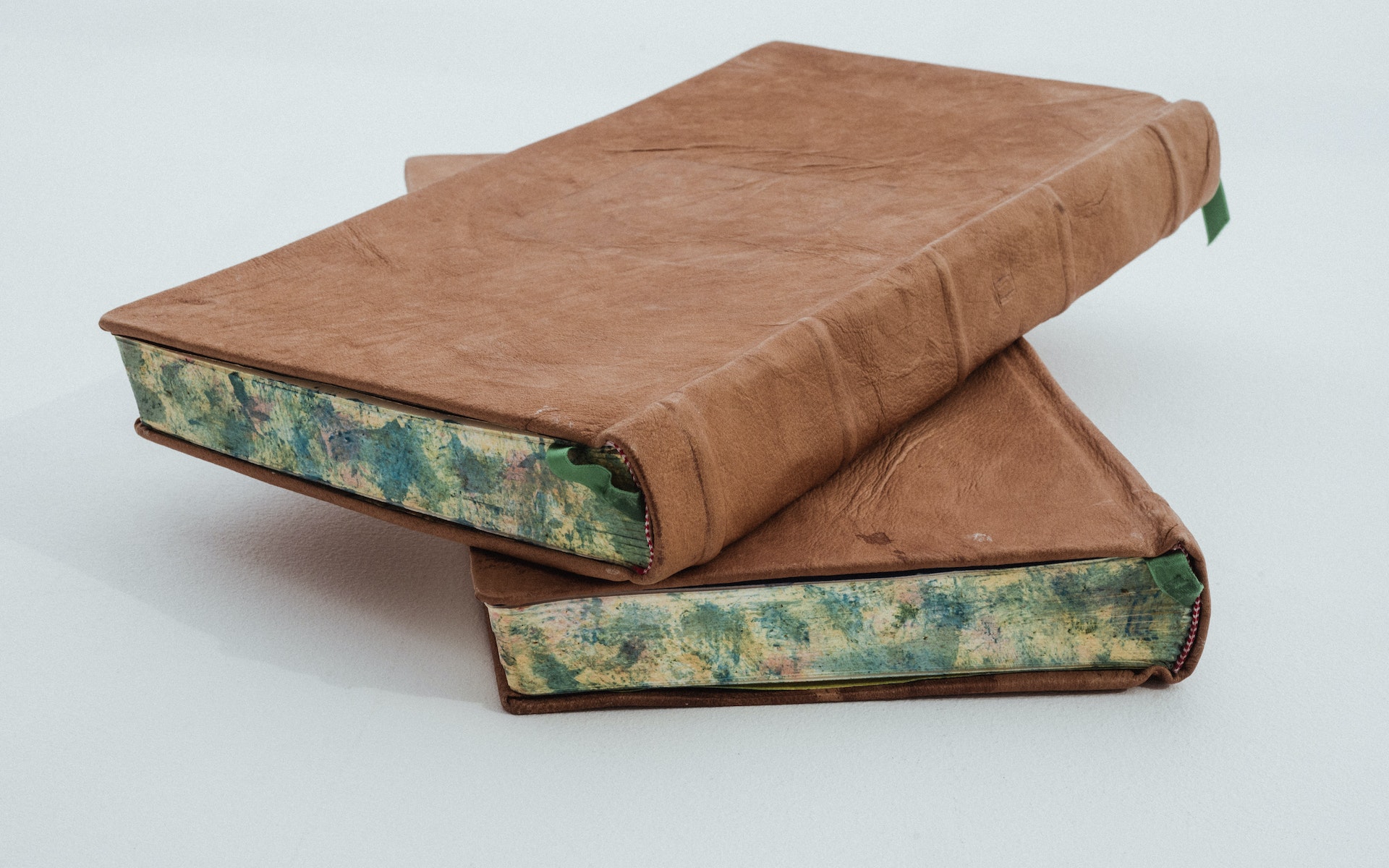 To celebrate the art and sovereignty of the Indigenous Sámi people and highlight Sámi perspectives of care and hospitality ‘The Sámi Pavilion’’s welcome area presents two Guest Books by the Sámi artist and elder, Elle Hánsa / Keviselie / Hans Ragnar Mathisen.

These two specially hand-made books incorporate historic symbols and materials of great significance to the artist and to the Sámi nation. Bound in soft sisti, reindeer hide, prepared with the materials and processes used by Sámi people since time immemorial transmitted across generations through duojars (duodji knowledge holders), the books’ covers tell important stories. The front cover is embossed with ‘Unity’ a design first conceived by Keviselie to illustrate his book “The Circle of Life – Woodblock Prints & Poems” (1982). The back cover is embossed with Sámi duojar Eva-Brith Varsi’s brooch of 1985 (traditional pattern), originally made of reindeer-leather, dark blue cloth and pewter embroidered with reindeer sinew. Keviselie used the same press that in 1838 issued the first newspaper in Romsa (Tromsø), where he lives.

In each Guest Book the first page is illustrated with the ČSV – Čájet Sámi Vuoiŋŋa! (Show Sámi Spirit!) symbol, that he created in 1974 during a Sámi political event in Máze. The ČSV movement of Sámi revitalization stems back to the 1960s. Its messages represent the importance of unifying Sámi perspectives, lands and peoples divided by colonial borders, as well as encourage the use of Sámi languages, knowledges and artefacts in everyday life. In a world of on-going colonialism whose most nefarious impact is to turn people against people, Keviselie’s message of unity is also call of survival.

‘The Sámi Pavilion’ Guest Books with their myriad greetings will be donated, upon the closure of Biennale Arte 2022, to the Sámi Art Museum of the future. Requested by Sápmi since the 1990s, as a space of sovereignty to nurture Sámi creativity and world-views, it is unrealized to this day.

Elle Hánsa / Keviselie / Hans Ragnar Mathisen (b. 1945) is an artist and thinker who lives and works in Romsa. Keviselie was a founding member of Mázejoavvku, the first Sámi Artists’ Group formed in the hamlet of Máze in 1978. His prolific artistic practice is primarily defined through a determined advocacy for Sámi rights, cultural expression and autonomy, as well as for the connectivity of Indigenous peoples around the world. It extends across a variety of media, including painting, graphic arts, drawing, sculpture, photography, book-making and illustration, cartography and writing. He is particularly known for his series of hand-drawn maps of Sámi, circumpolar and global Indigenous lands, in which he brought back Sámi and Indigenous place and geographic names that colonialism had removed. In so doing he revitalized Sámi language and sovereignty, as well as emphasized the connection between language and land, between people and land. Each map was decorated with symbols and objects of significance to Sámi spirituality and world-views. The beautifully crafted original maps were then replicated in an unlimited fashion to facilitate their presence in Sámi homes, and revitalize Sámi knowledges across the breadth of Sápmi.